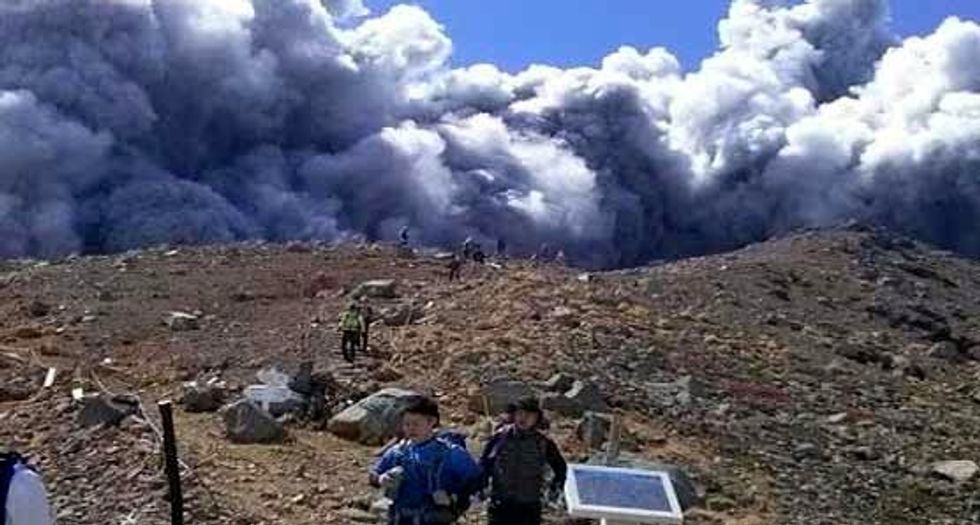 The eruption of the 3,067-metre Mount Ontake happened around midday. (AFP)

More than 30 hikers are feared dead after being found in "cardiac arrest" near the peak of an erupting volcano in Japan Sunday, police said, using a term usually applied before doctors are able to certify death.

Rescue workers found the individuals near the summit of 3,067-metre (10,121-foot) Mount Ontake, which erupted around noon on Saturday.

"We have confirmed that more than 30 individuals in cardiac arrest have been found near the summit," a Nagano prefecture police spokesman told AFP without elaborating further.

Rescuers were planning to bring four of them down the mountain by later tonight, Jiji Press said citing police sources.

Some 550 soldiers, police officers and firefighters were involved in a large-scale search-and-rescue operation in a bid to save dozens of hikers who were thought to have been stranded on the volcano since it erupted without warning spewing ash, rocks and steam into a sunny autumn weekend busy with tourists and hikers.

A suffocating blanket of ash up to 20 centimetres (eight inches) deep covered a large area of the volcano, had forced up to 150 to seek refuge in mountaintop shelters at one point.

The mountain is popular among hikers particularly in late September as leaves turn their colours.