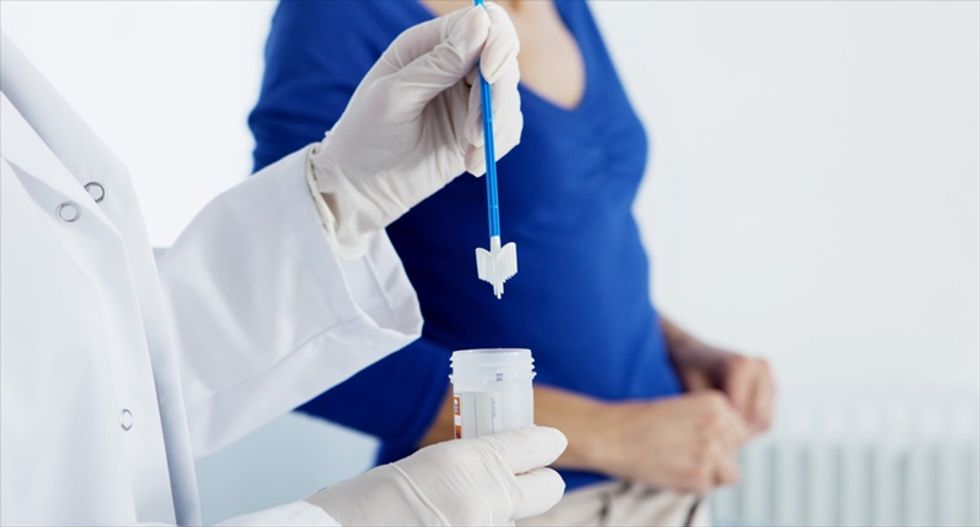 A simple urine test for the virus that causes cervical cancer could offer a less invasive and more acceptable alternative to the conventional cervical smear test, researchers said on Tuesday.

In a study comparing the accuracy of urine sample testing with smear testing conducted by a doctor, scientists from Britain and Spain found the results were good and said using the urine test to detect human papillomavirus (HPV) could lead to more women agreeing to be screened.

"The detection of HPV in urine is non-invasive, easily accessible and acceptable to women, and a test with these qualities could considerably increase uptake," the researchers said on Tuesday in thebmj.com, the online version of the British Medical Journal.

The study, which analyzed 14 studies involving 1,443 sexually active women, was led by Neha Pathak of the women's health research unit at Queen Mary University of London.

Urine testing for the particularly high risk strains of HPV that cause the majority of cervical cancer cases, had an overall sensitivity of 73 percent and a specificity of 98 percent compared with cervical samples.

HPV is one of the most common sexually transmitted infections, with up to 80 percent of sexually active women infected at some point in their lives.

Infection with specific high risk strains of HPV can cause cervical cancer, which kills around 266,000 women a year globally, according to the World Health Organization.

By the far the vast majority of cervical cancer deaths are in poorer countries where access to screening and prevention methods is less widely available.

In a smear test, an instrument called a speculum is inserted into the vagina to allow access to the cervix and a brush is used to collect cells from the surface of the cervix.

In wealthier developed countries, cervical screening for HPV has been in place for many years and have been able to catch many potential cancer cases before they develop.

More recently, national immunization programs using vaccines from drugmakers Merck and GlaxoSmithKline have been launched to protect girls from HPV.

Yet in developing nations, where some 445,000 cases were diagnosed and 230,000 women died of cervical cancer in 2012, infrastructures have not yet been established to run national screening programs and HPV vaccination is still rare.

In a commentary on Pathak's study, Henry Kitchener, professor and chair of gynecological oncology at Manchester University noted that even in developed countries such as Britain, for example, cervical screening coverage has fallen below 80 percent in recent years.

This is partly due to some complacency about cervical cancer as it starts to be come less common, he said, but also partly due to emotional factors such as embarrassment or fear of an invasive speculum examination.

Using a urine test instead of a smear could persuade those reluctant women to come for regular screening, Kitchener said, while in lower income countries that lack infrastructure "self sampling (urine testing) might even be beneficial and cost effective for all women who are eligible for screening".

(Reporting by by Kate Kelland. Editing by Jeremy Gaunt)