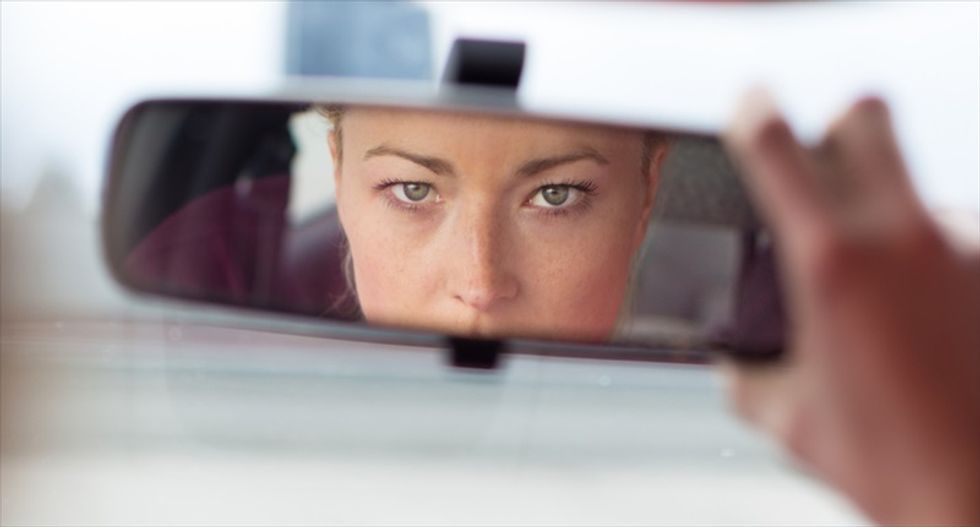 'Young Lady Looking Back Through The Rear View Mirror' [Shutterstock]

The debut of a livery car service providing women drivers for female passengers in the New York City area has stalled over lack of a sufficient number of drivers, the founder of the service said on Monday.

In a news conference on the steps of City Hall in Manhattan, Stella Mateo, the founder of SheTaxis/SheRides, said the launch of the service, which was scheduled for Sept. 16, has been delayed until a total of 500 women drivers can be recruited.

Mateo said the service, which will use an Uber-like smartphone app, determined that demand would outstrip the capacity of the 100 female drivers currently available to fulfill requests.

She said the app will not be released until SheTaxis/SheRides has signed on an additional 400 women drivers. SheTaxis is the name of the service in the New York suburbs, while SheRides is used in the city itself, which has regulations governing the use of "taxi" in a name.

"In the taxi and livery industry, where women comprise less than 3 percent of drivers but 60 percent of riders, women's needs go unmet on either side of the partition," said Mateo, whose husband Fernando is founder of the New York State Federation of Taxi Drivers.

Mateo said she hoped the new service, which will feature female drivers wearing hot pink pashmina scarves, would provide safety and convenience to women as well as economic opportunity.

Access to female drivers, she said, would particularly help some Muslim and Orthodox Jewish women whose religious beliefs prohibit them from traveling alone with unrelated men.

She said that encouraging women to drive would also allow them to become small business owners in an industry that has no gender pay gap and also provides flexibility for working mothers.

In order to recruit more women drivers, Mateo said SheTaxis/SheRides will hold a women's opportunity job fair starting Sept 16 at its Long Island City offices for seven days a week from 10 am to 8 pm.

As for legal questions that have been raised as to whether a women-only car service might be discriminatory against men, Andrew Celli, an attorney for SheTaxis/SheRides, said "We have no legal issues as far as I'm concerned."

He noted that the service, which partners with a number of established livery car firms, would not exclude male riders.

Tamika Mallory, spokeswoman for SheTaxis/SheRides, has said male riders could be referred to a livery affiliate if a female driver was not available.

Stella Mateo did not give a target date for the launch of the service, which will rely on an Apple app with an Android version to follow.