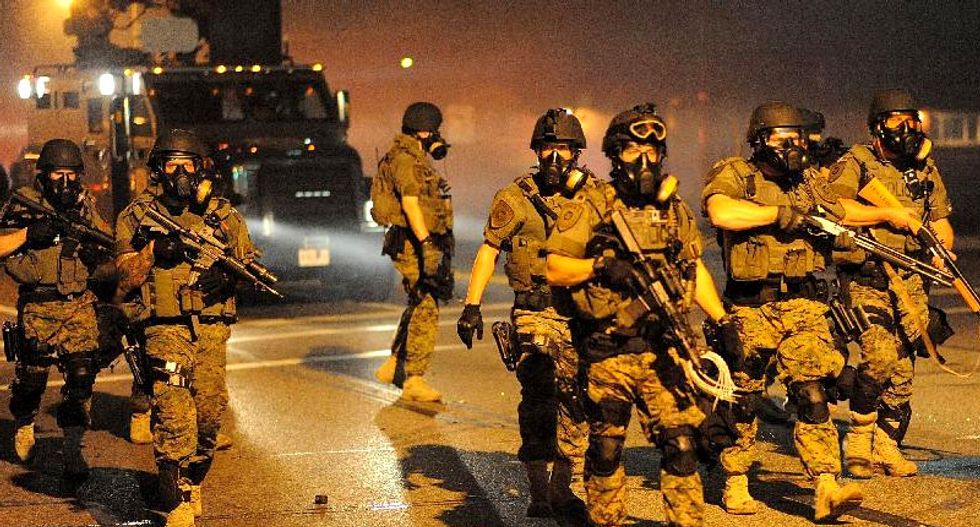 Law enforcement officers watch on during a protest on West Florissant Avenue in Ferguson, Missouri on August 18, 2014 (AFP Photo/Michael B. Thomas)

A police officer from the strife-hit Missouri city of Ferguson was shot while responding to a burglary on Saturday and the suspects were still at large, law enforcement officials said.

The officer was chasing two suspects outside the Ferguson Community Center on Saturday night when one turned and shot him in the arm, St. Louis County Police Chief Jon Belmar told a news conference.

The officer, who is expected to survive, returned fire but apparently did not hit either suspect, Belmar said.

Belmar said the shooting did not seem to be connected to peaceful protesting occurring elsewhere in Ferguson.

"I wouldn't have any reason to believe right now that it was linked in any way, shape, manner or form with the protests," he said.

The St. Louis suburb has seen weeks of sometimes violent demonstrations following the death of black teenager Michael Brown, who was shot by white police officer Darren Wilson on Aug. 9.

Police searched the area for the two individuals through Saturday night, law enforcement officials said, and officers had set up road blocks around the area.

An off-duty St. Louis City police officer was shot at and suffered a minor arm injury from broken glass just hours later while driving on a nearby freeway in a personal car, the police department said in a statement.

A crowd of about 100 people gathered near the scene of the shooting, with a group breaking off to stage a protest at the Ferguson police headquarters, according to Kareem Jackson, 27, a musician who goes by the stage name Tef Poe and is a member of the activist group HandsUp United.

"People are peaceful as a duck, just literally standing on the side of the street watching," he said in a phone interview from the site where protesters had gathered.

The apology was not well-received among some and led to reported protests hours after it was issued.

Many in Ferguson, a mostly black community of 21,000, have called for Jackson to be fired for what they saw as a heavy-handed response in the aftermath of the killing.