Penn Jillette argues in bad faith to support his own sexism 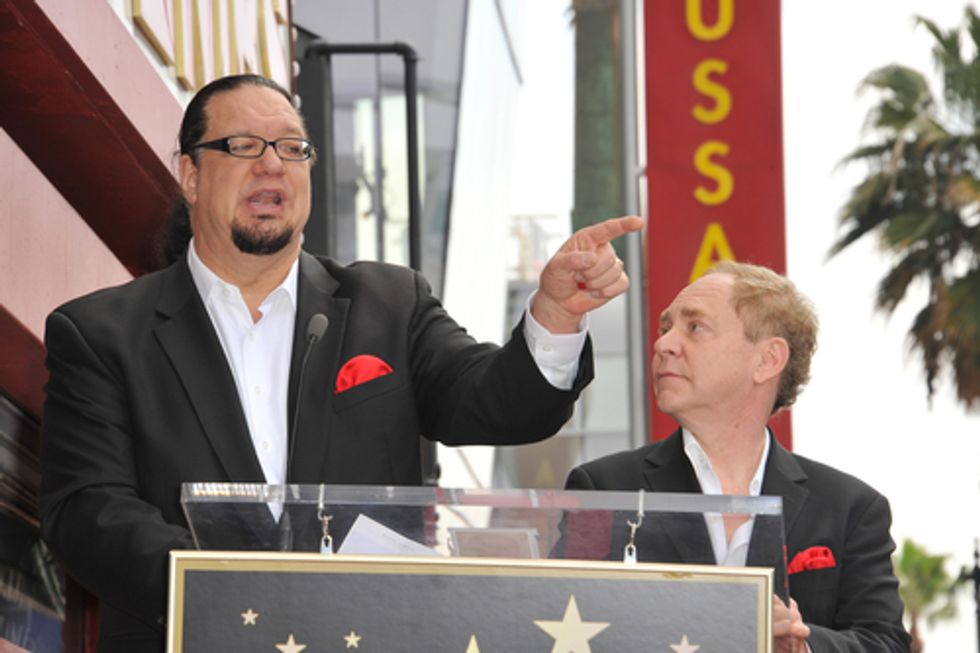 So a lot of people in skeptical circles have been reading and discussing this piece by Mark Oppenheimer in Buzzfeed titled "Will Misogyny Bring Down The Atheist Movement". Much of the focus has been on the issue of the repeated accusations against Michael Shermer and how baffling it is that the reflexive protect-the-creep position seems to stay firm no matter how much evidence piles up against him. (And of course, there's the typical excuses made for assault when the victim has been drinking, even though, for instance, no one would say that running people on the sidewalk over in your car is less of a crime if the victims were drunk.) Because of the serious problem of sexual harassment and sexual assault, the more low grade problem of disingenuous motherfuckers making pathetic excuses for their own sexist bullshit has been less examined. But I am here, folks, to say that while Penn Jillette is accused of nothing more than douchebaggery, his excuses for his douchebaggery are not acceptable. To summarize, Lindy West wrote a piece making fun of hack Super Bowl commercials and Penn Jillette---who I guess is a big fan of shitty commercials written by hacks?---took issue with her lack of enthusiasm for the comedy stylings of TV ads.

Calling a woman a "cunt" is unlikely to be acceptable in most situations, but what was really startling about this was how he went there because she was not impressed by Super Bowl commercials. I mean, what next? Getting irate because there's an article out there by a lady who thinks maybe that Olive Garden isn't the best restaurant she ever ate at? It suggests a general distaste for women expressing opinions at all, just pure outrage that lady mouths are open for anything but admitting the presence of penises. Why not take your own advice and not read her article if you don't think it's funny? I mean, calling someone a "cunt" certainly takes a lot less talent than West's article mocking Super Bowl ads did.

(To be fair, Lindy West typed out her piece, so make the appropriate sex joke here about what women's hands are for, if not writing out jokes about the Super Bowl.)

Oppenheimer's line of questioning to Jillette about this no doubt carried the implication that only a wildly out of control misogynist would have such a nasty reaction to the mere whiff of a hint that a woman might be permitted to hold a less-than-laudatory opinion on Pepsi commercials, causing Jillette to come up with the most condescending faux concern-for-women bullshit I think I may have ever read.

Jillette argued that the occasional misstep was a small price to honor the principle of artistic freedom and access, for women as well as men. “I have a 9-year-old daughter, and it’s really important to me that she read Ulysses. I don’t want there to be a rule that there is a certain kind of language used for women, and a certain kind used for men. That’s appalling. That patronizing of women is despicable. I don’t want women to be robbed of literature.”

The only person being patronizing here is Jillette if he thinks anyone is stupid enough to buy his claim that we'll all lose access to Ulysses if people dare suggest the obvious, which is his ease with applying the word "cunt" to women is obnoxious. Jillette starts with the assumption that a woman can't tell the difference between reading the word "cunt" to describe an actual vagina and having some needle-dicked asshole call her a "cunt" in an effort to shame her about having opinions. If he thinks women are that stupid, then how could he possibly think they're smart enough to understand a work as dense as Ulysses? Or perhaps it is Jillette who is too stupid to know the difference between calling someone a cunt and simply using the word "cunt". For reference, here is the one and only use of the word "cunt" in Ulysses, which I'm quoting because I'm super skeptical that Jillette has actually read the book he pretentiously references:

No, not like that. A barren land, bare waste. Vulcanic lake, the dead sea: no fish, weedless, sunk deep in the earth. No wind would lift those waves, grey metal, poisonous foggy waters. Brimstone they called it raining down: the cities of the plain: Sodom, Gomorrah, Edom. All dead names. A dead sea in a dead land, grey and old. Old now. It bore the oldest, the first race. A bent hag crossed from Cassidy's clutching a noggin bottle by the neck. The oldest people. Wandered far away over all the earth, captivity to captivity, multiplying, dying, being born everywhere. It lay there now. Now it could bear no more. Dead: an old woman's: the grey sunken cunt of the world.

If you're trying to read James Joyce, I recommend learning what "context" is. In fact, if you're trying to read Hop On Pop, I recommend learning what "context" is, because words derive their meaning from it. For instance, if I were to write, "This Super Bowl commercial stinks like an unwashed asshole," that means something different from saying, "Penn Jillette is an unwashed asshole." I would understand if he took more offense at the latter, though as a woman with opinions, it appears I am likely a "cunt" no matter what form those opinions might take. Since context is a struggle for Jillette, I suppose it's probably too much for him to understand that there's a massive difference between criticizing someone's speech and censoring it. No one censored his Facebook post calling Lindy West a "cunt". On the contrary, it was screenshot and shared widely, so everyone could read it and draw their own conclusions about it. (Conclusion: Penn Jillette is an unwashed asshole.) By the same measure, it can be reasonably assumed that the people in question would also agree that Jillette's daughter should feel free to read whatever she wants, be it James Joyce or her dad's childishly misogynist social media rants, and also form her own opinions of them. I don't think anyone was arguing for censorship. For Jillette to imply that they were either suggests that he cannot argue in good faith or that he's too stupid to breathe. Either quality should disqualify him from being understood as a "skeptic", much less held up as some kind of hero of the skeptical movement.