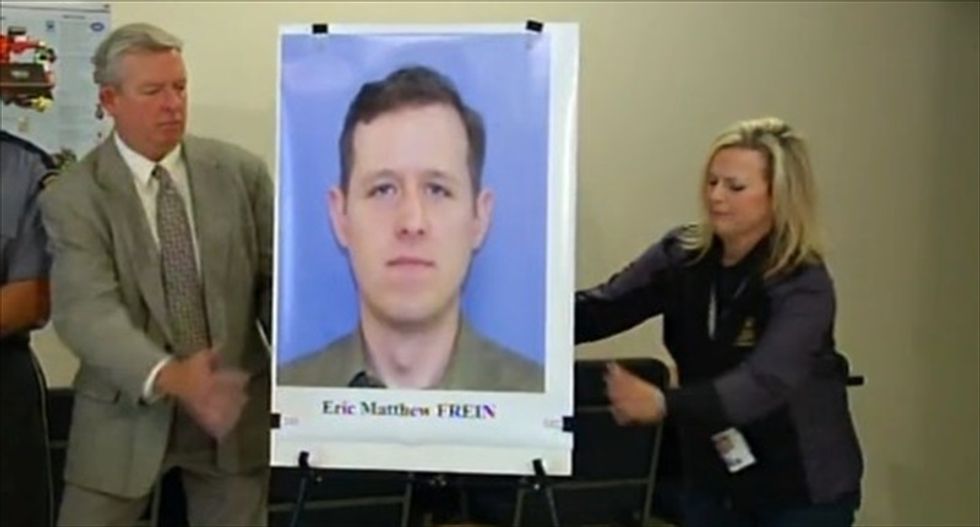 The survivalist suspected of killing a Pennsylvania trooper and wounding another in an ambush at a police barracks in the Pocono Mountains had planned the attack for at least two years, state police said on Friday.

A search of a computer hard drive used by the suspect, Eric Frein, revealed he had studied survivalist skills and tips on how to evade law enforcement, said Lieutenant Colonel George Bivens of the Pennsylvania State Police.

“We are convinced that Eric Frein has been planning this attack for least a couple years,” Bivens said. “That information is supported by a search of a computer hard drive which Frein had access to.”

Bivens would not say who owned the computer that Frein used, but he did say the suspect had removed the hard drive from his own computer, found at the home of his parents, before the Sept. 12 attack. Frein, 31, who lived with his parents in Canadensis, is now on the FBI's Ten Most Wanted Fugitives list.

The computer "gave us a lot of insight,” into the techniques that Frein may have used to elude police in the rugged mountain terrain, Bivens said.

But the drive contained no information about a possible motive for the shooting, he said, standing outside the Blooming Grove barracks where a sniper killed Corporal Bryon Dickson, 38, and wounded Trooper Alex Douglas, 31.

Earlier, police spent at least 10 hours in an extensive search of an abandoned resort complex near the Frein home. The Inn at Buck Hill Falls, a 400-room, fortress-like structure surrounded 4,600 acres of land in Barrett Township, closed in 1991.

“He had an interest there and he spent time there since it closed,” said Bivens. “Every inch had to be cleared."

The search has involved hundreds of officers from state, local and federal agencies, using helicopters, armored vehicles and sophisticated tracking technology. Still, Frein has managed to evade capture, even though police say they have sighted him several times, just out of reach.

Bivens said police had no reports of any sighting of the suspect on the inn's grounds. Frein, an expert marksman who police believe still has the murder weapon, was last spotted days ago as tracking dogs approached, he said.

Police have uncovered evidence that led them to believe Frein, who studied chemistry at East Stroudsburg University, has experimented with explosives, Bivens said.

“There’s always the possibility of a booby trap out there,” he said.