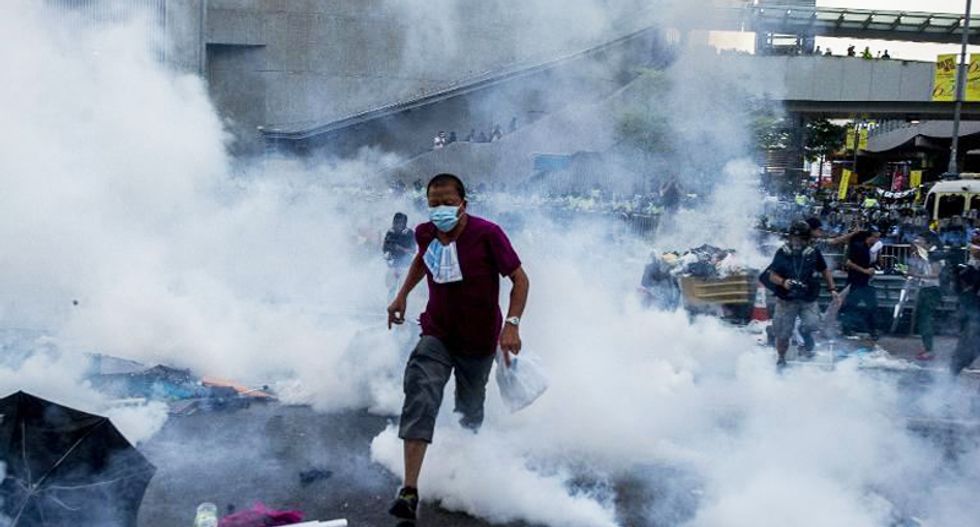 A pro-democracy demonstrator runs as police fire tear gas towards protesters near the Hong Kong government headquarters on September 28, 2014 (AFP)

Police repeatedly fired tear gas after tens of thousands of pro-democracy demonstrators brought parts of central Hong Kong to a standstill Sunday in protest at Beijing's refusal to grant the city unfettered democracy.

The rare chaotic scenes -- in which crowds fought running battles with riot police in the streets of the international financial hub -- forced protest leaders to warn supporters to "retreat and save their lives" if rubber bullets were fired.

Protesters screamed "Shame!" at officers, many in gas masks and riot gear, as they tried to shield themselves from the clouds of gas which was last used in Hong Kong in 2005.

It marked a dramatic escalation of protests in the city, which rarely sees such violence, after a tense week of largely contained student-led demonstrations exploded into mass angry street protests.

Many officers had rubber bullet rifles slung over their shoulders, prompting protest leaders to call on demonstrators to pull back if police used them of they felt their lives were threatened.

"This is a matter of life or death. If their lives are threatened they should retreat and save their lives," said professor Chan Kin-man, a co-founder of the Occupy Central group which threw its weight behind the protest on Sunday.

As acrid plumes of smoke wafted across the city, demonstrators expressed outrage at the city's police but remained defiant.

"We are unarmed, just standing here, there was no warning for the gas," Harry Hung told AFP after a volley was fired.

"This is unbelievable. This is a peaceful protest and the police are the ones using violence," added demonstrator Jade Wong. "The level of police violence here is just like mainland China, it was never like this before."

The tear gas did little to stem the tide of demonstrators occupying more than 800 metres of a vital multi-lane highway usually filled with whizzing vehicles.

Fresh protests also sprung up late Sunday night in the busy shopping district of Mongkok in an indication that demonstrators were planning to stretch the city's police force further.

Around three thousand demonstrators blocked a major road, bringing traffic to a standstill and opening up a second significant flashpoint in the key financial hub.

A dozen police looked on helplessly as the demonstrators took over Nathan Road, chanting slogans and wrapping their eyes in clingfilm to protect themselves in the event of pepper spray being deployed, an AFP reporter said.

"We need to strike for freedom and for our democracy. We've come to Mongkok because it's very dangerous now in Central and Admiralty," 20-year-old student Calvin Chan told AFP, referring to the two districts where tear gas had been deployed.

Protesters have defiantly stuck to their demands for full democracy, after Beijing last month said it would allow elections for the city's next leader in 2017 but will vet the candidates -- a decision branded a "fake democracy" by protesters.

Police said they had made 78 arrests for offences ranging from forcible entry into government premises, unlawful assembly, disorderly conduct in public place and assaulting public officers.

The protesters in central Hong Kong were warned to leave the area which was under lockdown.

"Otherwise police will take arrest and removal action to restore public order," they said in a statement.

Twenty-six people were being treated for injuries, the hosptial authority said.

China, which stations a People's Liberation Army (PLA) garrison in Hong Kong, said it was confident the city's administration could handle the protest.

Beijing "firmly opposes all illegal activities that could undermine rule of law and jeopardise 'social tranquility' and it offers its strong backing" to the Hong Kong government, a spokesman for China's Hong Kong and Macau affairs office was quoted by the Xinhua news agency as saying.

In a statement the Hong Kong government said it had "no intention to seek help from the PLA".

Students have boycotted classes in the past week, which saw the central government complex stormed, with the prominent pro-democracy group Occupy Central joining on Sunday, bringing forward a mass civil disobedience campaign that had been due to start on October 1.

"We're simply using our freedom of speech and they're treating us like rioters," he said.

Former colonial power Britain handed Hong Kong back to China in 1997 under a "one country, two systems" deal that guarantees liberties not seen on the mainland, including freedom of speech and the right to protest.

But tensions have been growing over fears that these freedoms are being eroded, as well as perceived political interference from Beijing.