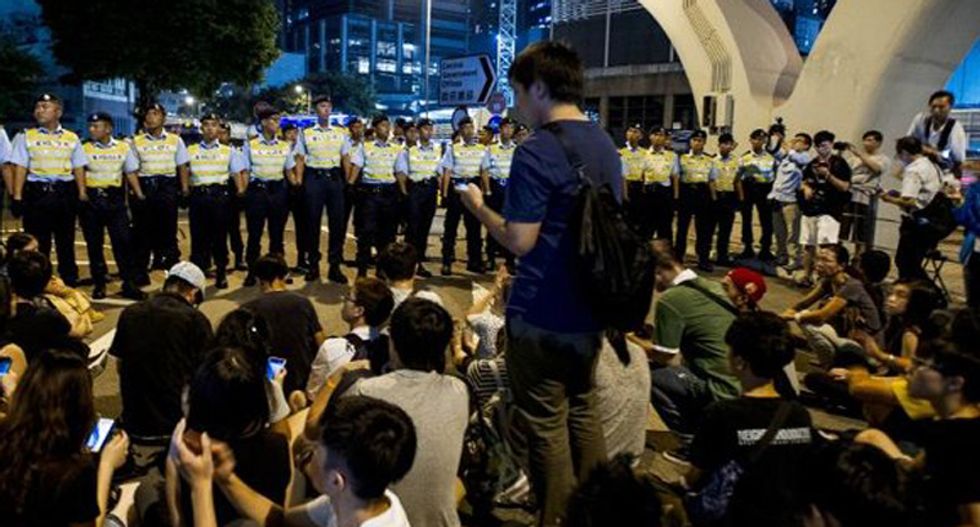 Protestors face police as people entered the headquarters of the Legislative Council on September 26, 2014 in Hong Kong (AFP)

Dozens of protesters broke through the gates of Hong Kong's government headquarters late Friday in an ongoing student demonstration against Beijing's refusal to grant the city unfettered democracy.

Six people were arrested for offences ranging from forcibly entering government property and public disorder to assaulting an officer, police said in a statement.

Around 150 people pushed into the grounds of the complex, some scaling over a tall exterior fence, as others outside yelled "open the gates".

Police repeatedly used pepper spray on the protesters, who used umbrellas, surgical masks and goggles to protect themselves, an AFP reporter at the scene said.

Officers held up red signs warning people to "stop charging or we use force". Riot police wearing helmets and carrying shields arrived to push back the crowd in the early hours of Saturday morning.

Student groups are spearheading a civil disobedience campaign along with democracy activists in a days-long protest at Beijing's announcement last month that it would vet who can stand for Hong Kong's top post of chief executive at the next election.

By early Saturday, around 1,000 people were outside the Southern Chinese city's main government complex. Numbers had earlier swelled to more than 2,000 as secondary school pupils, some wearing uniforms, joined the university students.

In a statement police confirmed they had made six arrests of Hong Kong citizens aged 16 to 29, and that around 150 students had entered the government grounds. News footage showed officers taking away prominent student leader, Joshua Wong.

Early Saturday, a government statement had "expressed regret" that protesters had stormed the complex, saying security personnel, police officers and protesters had suffered injuries but without giving details.

Teenage pupils -- many saying they had defied their parents' wishes -- earlier descended on Hong Kong's government headquarters to add their voices to a class boycott kicked off by university students on Monday.

Then on Thursday night, more than 2,000 people took their protest to the residence of Hong Kong leader Leung Chun-ying with the hope of speaking to him. Leung has so far refused to speak to the students or meet their leaders.

Protests continued Friday morning with around 900 secondary school students as young as 13 gathering outside the city's main government complex shouting: "I want real elections not fake ones".

Chung Chun-wai, 17, said many of his friends joined the protest in defiance of their parents, highlighting the often sharp generational divide in the former British colony over its political future.

"I think secondary school students are a part of society and I consider myself a citizen of Hong Kong. That's why I think I need to bear the responsibility to care about society and to voice the real opinions of Hong Kongers," he said.

Organisers said around 3,000 people showed up to the secondary school strike.

Meanwhile around 300 people, mostly elderly retirees originally from mainland China, staged a counter-protest to support Beijing's decision in neighbouring Tamar Park, replacing students who had gathered there since Tuesday.

Occupy Central, a prominent grassroots pro-democracy group, has vowed to take over the city's Central financial district if its demand that Hong Kongers be allowed to nominate who can stand for leader is not met.

Occupy co-founder Benny Tai has previously hinted the takeover could begin on October 1, a national holiday when much of the district will be empty.

He told reporters at the city's Foreign Correspondents' Club on Friday: "After next week's action we may not be able to change the standing committee's decision immediately, but if we could have that very strong determination shown, I personally have the confidence that one day democracy will come to Hong Kong."

Last month China said Hong Kongers would be allowed to vote for their leader for the first time in 2017, but that only two or three candidates approved by a pro-Beijing committee could stand.

Britain handed Hong Kong back to China in 1997 under a "one country, two systems" agreement that allows it civil liberties not seen on the mainland, including free speech and the right to protest.