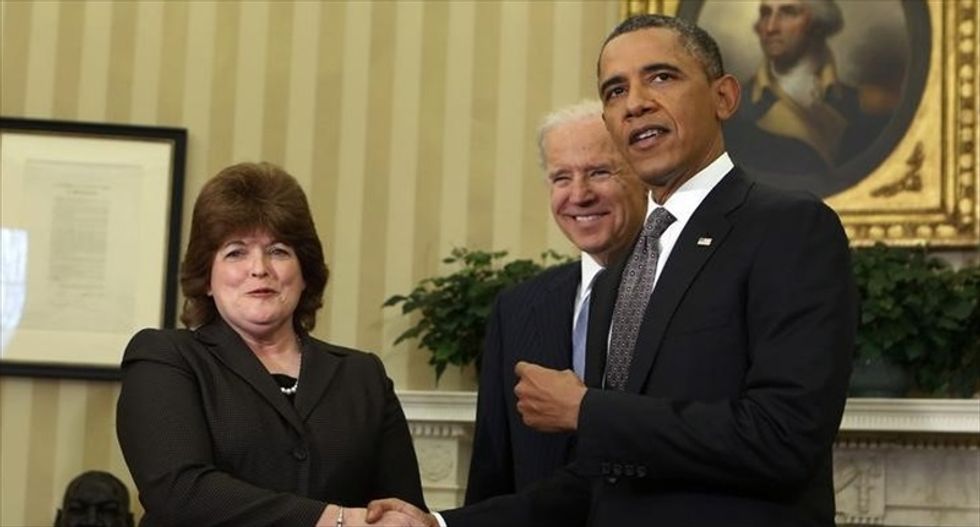 President Barack Obama (R) shakes hands with U.S. Secret Service agent Julia Pierson (L) after she is sworn in as the first woman Director of the Secret Service by Vice President Joe Biden in the Oval Office of the White House in Washington on March 27, 2013. By Larry Downing for Reuters.

The head of the U.S. Secret Service is expected to face blistering questions from lawmakers on Tuesday about the latest White House security breach and a string of scandals that have tarnished the image of the agency charged with protecting the president.

Republicans and Democrats alike said they want Secret Service Director Julia Pierson to explain during her appearance before the House Oversight and Government Reform Committee how she plans to change the agency's culture and procedures.

The hearing was prompted by a September 19 incident in which a man carrying a knife scaled the White House fence, raced past security officers and made it inside the executive mansion's north entrance. The Washington Post reported on Monday that Omar Gonzalez, a 42-year-old Iraq war veteran, overpowered a guard at the front entrance and made it much deeper into the building than previously known before he was subdued.

While Pierson's responses about that breach may be limited because of the ongoing investigation, lawmakers also intend to grill her about other incidents: a lone gunman firing shots at the White House in 2011, a prostitution scandal involving agents in Colombia in 2012 and a night of drinking in March that led to three agents being sent home from a presidential trip to Amsterdam.

The incidents give the impression the protection offered by the Secret Service is deficient, said Republican Representative Jason Chaffetz, who heads the Oversight panel's national security subcommittee.

"I'm concerned that there's a total lack of leadership and very questionable protocol," Chaffetz said in an interview.

"I get the sense the problems are getting worse, not better, and I want to give her a chance to respond," he said of Pierson.

Chaffetz said he wants to know more about the agency's policies regarding the use of lethal force. In an era of threats from Islamic State militants, he said, the agency used far too much restraint in dealing with Gonzalez.

New questions about the 2011 shooting incident were raised by the Washington Post, reporting on Sunday that it took the agency four days to realize that seven shots had struck the White House.

The discovery came to light only after a housekeeper noticed broken glass and chunks of fallen concrete, even though some officers had earlier reported shots fired at the White House, the newspaper said. It attributed the report to people familiar with the matter.

"I want to know about the culture that could let this happen," said Representative Elijah Cummings, the Oversight committee's top Democrat. "I don't want people to even imagine that they can get past the Secret Service to do harm to anyone they're guarding, period."

President Obama appointed Pierson, 55, a 30-year Secret Service veteran, in March 2013. The first female director in the agency's 148-history, she was given the mission of cleaning up the agency's culture after the 2012 trip to Colombia in which up to a dozen agents were found to have hired prostitutes.

She has asked the committee to hold part of the hearing in a classified setting, behind closed doors. Divulging too much about security procedures at the White House would "arm" would-be attackers with critical information, she said.

"Were I to provide frank disclosures to the committee in response to questions about these and other topics in the setting of a public hearing, I would be undermining the Secret Service's protective mission," she wrote to Oversight Committee chairman Darrell Issa.

A spokesman for Issa said he is considering the request and may split the hearing into public and classified sessions.

District of Columbia delegate Eleanor Holmes Norton, a Democrat, said she will raise concerns about spending caps that have held down the growth of the agency's budget.

But other lawmakers from both parties said they do not believe that is an issue. Congress approved a $918 million protection budget for the agency this year, about $5 million more than the administration had requested.