Sheriff pummels driver after he’s asked for his badge: 'Here's my badge, motherf*cker' 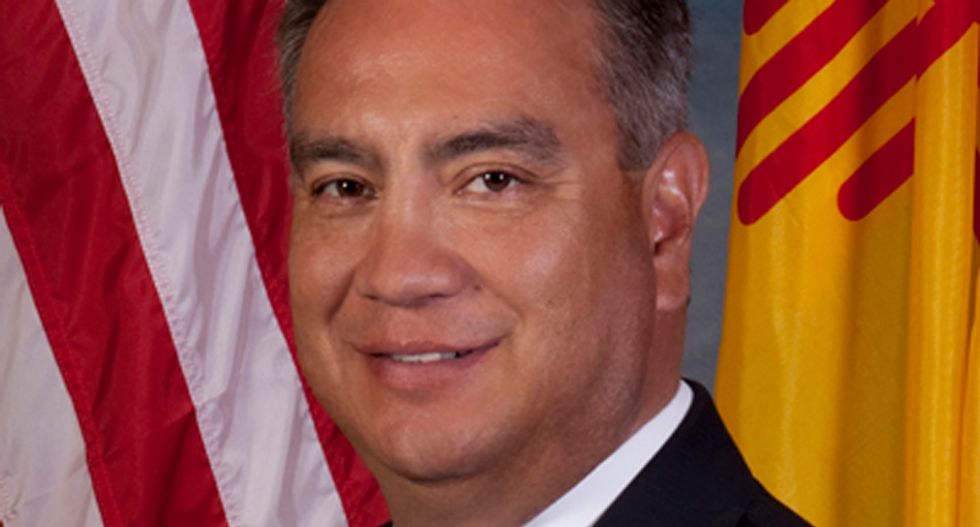 A New Mexico sheriff with a controversial past was convicted Friday on federal firearms charges, assault, and violation of a citizen’s civil rights in a road rage incident in March.

Rio Arriba Sheriff Tommy Rodella, 52, was immediately handcuffed and taken into custody over his attorney's objections and the cries of his wife, State Rep. Debbie Rodella, following his conviction in Federal court, according to the Albuquerque Journal.

According to court documents, the incident began when an off-duty Rodella tailgated motorist Michael Tafoya, making a "come on" gesture to him.

Rodella, who was in his personal car accompanied by his son, Thomas Rodella Jr., gave chase after Tafoya sped away. After trapping Tafoya, the two men pulled him from his car and onto the ground where Tafoya begged the men not to kill him as the older Rodella brandished a handgun.

According to Tafoya,  Rodella Jr. told him the older man with a gun was the sheriff. When Tafoya asked to see his badge, Rodella reportedly grabbed Tafoya by the hair and said, “Here’s my badge, motherf*cker,” and punched him in the face with it multiple times.

Tafoya was arrested by Rodella but his case was dismissed after several witnesses backed up his story.

Following the conviction of Rodella, U.S. Attorney Damon Martinez issued a statement saying, "Today a federal jury found that in attacking an innocent civilian, Sheriff Rodella chose to abuse his power rather than uphold his oath to protect the public. I commend the victim who testified in this case for having the courage to step forward and assert his civil rights, and for trusting the Department of Justice to protect him. I am hopeful that today’s verdict brings a measure of justice to the victim and the people of Rio Arriba County.”

Rodella is no stranger to controversy, having been investigated by the FBI for taking bribes, and ousted as a magistrate by the State Supreme Court for multiple infractions.

During his 13-year career in the State Police, Rodella was disciplined for marijuana use, improper use of a weapon, falsifying official reports, abusing sick leave, and using his position for personal gain, before retiring on a disability pension.

Despite his background, Rodella was elected sheriff of Rio Arriba in 2010.