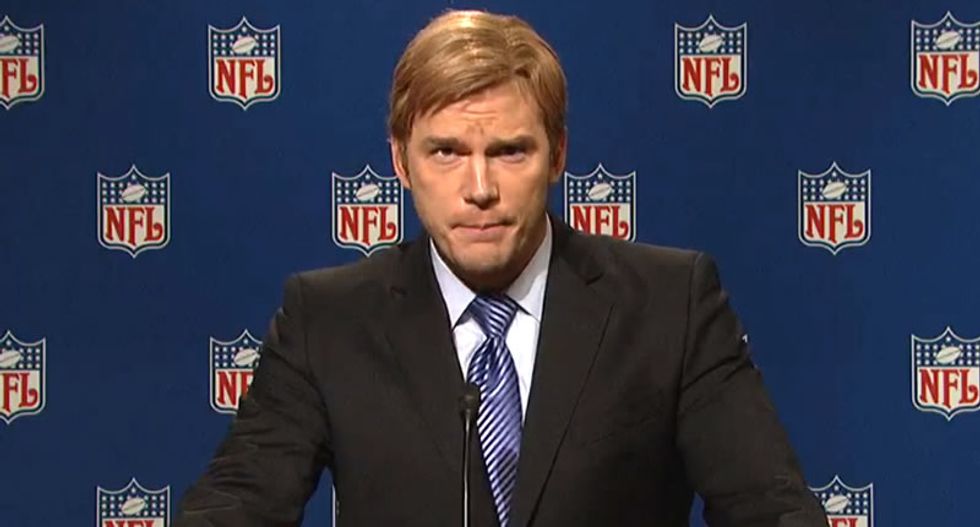 On the season premier of Saturday Night Live last night, the 40-year-old show went after Roger Goodell and the National Football League's response to its recent domestic violence and child abuse scandals.

In a skit mocking CNN's State of the Union, Candy Crowley -- played by Aidy Bryant -- tosses to Chris Pratt as Roger Goodell, who said that "in times of trouble, you learn who your friends are. So I want to thank all the people who stood by me: Redskins' owner Daniel Snyder, Michael Vick, and Saints coach Sean Payton, for not holding me to the same standards I held him. I appreciate that."

Crowley then introduced her panel, which consisted of Kenan Thompson as Ray Lewis and Jay Pharoah as Shannon Sharpe. Lewis, who was implicated in a 2000 murder at a Super Bowl party, refused to say anything to Crowley that didn't involve taking children to school.

In response to a question about Adrian Peterson's child abuse case, he replied, "children need an education, and one way they receive that is by going to school. You wake up, you feed the child, you get the child dressed, you get 'em off."

"But I'm asking you," Crowley replied, "if you've ever used corporal punishment on your children."

"Child has a book bag," Lewis said. "A lunchbox. And I provide those things. Let me be perfectly clear -- school buses are yellow. Bus pulls up. Child gets on. Child goes to school."

When Crowley asked Sharpe whether violence was a problem in the NFL, he replied, "in the NFL, you're paid to be aggressive. When you get off that field, you're full of adrenaline, testosterone, pain killers, and Bud Light Lime."

"The NFL needs to calm these players down," he continued. "Maybe have some herbal tea, or a soothing light show -- the possibilities go to infinity, Candy."

At that point, Crowley returned to Goodell, who was pitching the NFL's new domestic abuse program, which he referred to as "Take Back the Night! We Fight Women!" accidentally omitting the "for" in the placard behind him.

"What this says," he said, pointing at the placard, "is 'we fight women!' We fight for women, I mean. We fight for some women? We, um, women?"

Watch the entire opening skit below.