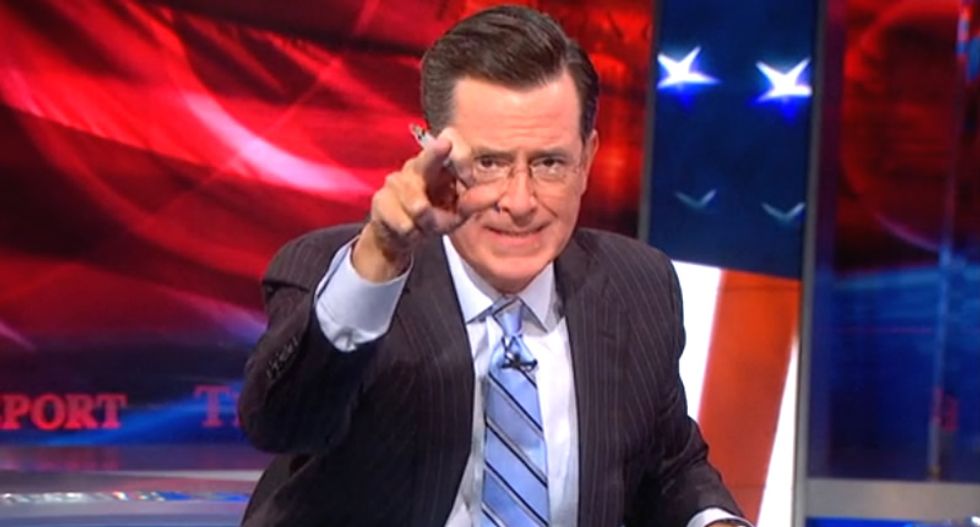 "That's the president arriving with a Styrofoam cup either with coffee or tea," co-host Steve Doocy said, "nonetheless, he didn't switch hands, and people are fired up about this 'latte salute.'"

"I am more than fired up about this! WARNING!" Colbert shouted, pointing at himself, "CONTENTS ARE HOT!"

"And before the ugly accusations start flying from the liberals -- this has nothing to do with the fact that the coffee was black," he continued. "I am sick and tired of the race hustlers out there playing the Starbucks gift card!"

After playing a clip in which Karl Rove informed Fox News viewers that, in fact, it was chai tea in the cup, Colbert said, "I'll bet that chai tea had a sprig of arugula in there and was certified halal by an undocumented gay Muslim barissta!"

"Anyone who says Obama's coffee salute was an awkward accident rather than a manifestation of a twisted mind hellbent on disrespecting our armed forces," he went on, "prepare to be educated."

Colbert cut to a clip of Fox & Friends' Brian Kilmeade making a surprisingly convincing argument. "Look, obviously, I don't think he said, 'Let me put the coffee in this hand and salute a marine,'" Kilmeade said. "He was buttoning his jacket with one hand, he had a coffee in the other -- obviously, he wants to have it back. I don't think he intentionally did that, do you?"

"Now, does that sound idiotic?" Colbert asked. "Yes, because she didn't intend it to. The point is, she was outraged, so she had no choice but to strike back with the most powerful puns in her arsenal."

"Was it a 'latte' disrespect," she said, "or a 'latte' do about nothing? Send us your hashtag emails now."

"I will send you my hashtag emails now," Colbert replied. He then whipped out his laptop and proceeded to send a pun-laden "hashtag email" to the Fox & Friends crew that must seen to be believed.

Watch the entire September 24, 2014 episode of The Colbert Report below via Hulu.