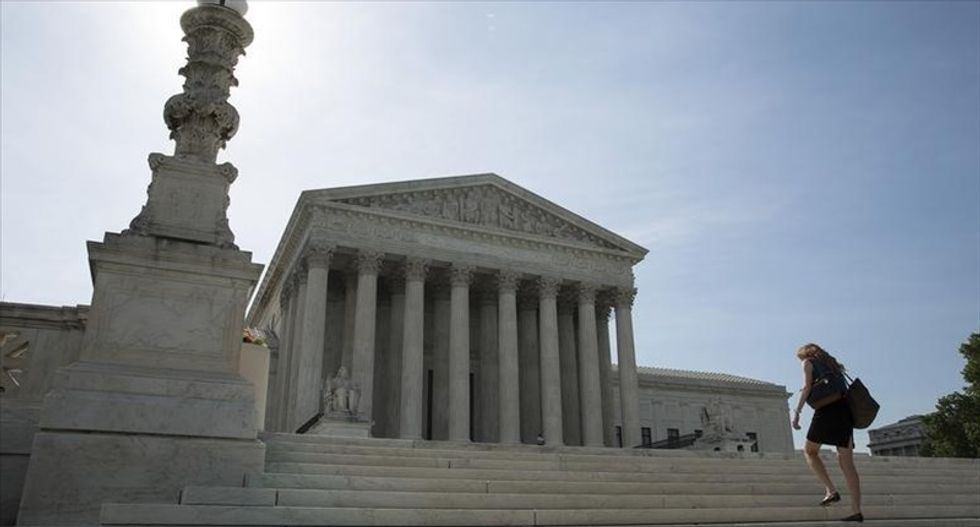 A woman walks to the Supreme Court in Washington on June 19, 2014. By Joshua Roberts for Reuters.

The U.S. Supreme Court on Monday cut back on early voting in Ohio by preventing people from casting in-person ballots this week in the lead-up to the November 4 midterm elections.

The Supreme Court voted 5-4 along ideological lines to put on hold a ruling by U.S. District Court Judge Peter Economus earlier in September that required the Ohio secretary of state to restore early voting hours cut by a new state law this year.

The stay will be in effect until state officials file an appeal and the U.S. Supreme Court decides whether to hear the case, the court said.

If it does, it would not be before this year’s election. The case would likely be argued and decided in the top court’s coming term, which begins October 6 and ends in June 2015.

Ohio established its early voting period in 2005, following a 2004 general election in which some voters in urban areas were forced to wait up to 12 hours to cast a ballot.

In February, the majority Republican state legislature approved a bill that cut the early voting period to 28 days from 35 and Ohio Secretary of State Jon Husted ordered other cuts in voting hours to make in-person voting uniform across the state.

The legislature cut the first week of early voting, which overlapped with voting registration, allowing residents to register and cast a ballot on the same day.

The Ohio branch of the National Association for the Advancement of Colored People, a number of African-American churches and the League of Women Voters of Ohio filed a lawsuit challenging the state's changes.

Economus ruled that the changes would suppress turnout by minorities and the poor and ordered Ohio to restore the in-person early voting days as well as voting hours on multiple Sundays and weekday evenings.

State attorneys had said Ohio should have uniform voting hours for all counties and argued that the ruling would increase costs and the chance of voter fraud. A panel of the 6th Circuit U.S. Court of Appeals upheld Economus's decision on Sept. 24.

Dale Ho, director of the ACLU's Voting Rights Project, said in a statement that the court's decision would "deprive many Ohioans of the opportunity to vote in the upcoming election."