Tenn. man says he 'serves the Lord' with billboard calling gays an 'abomination' 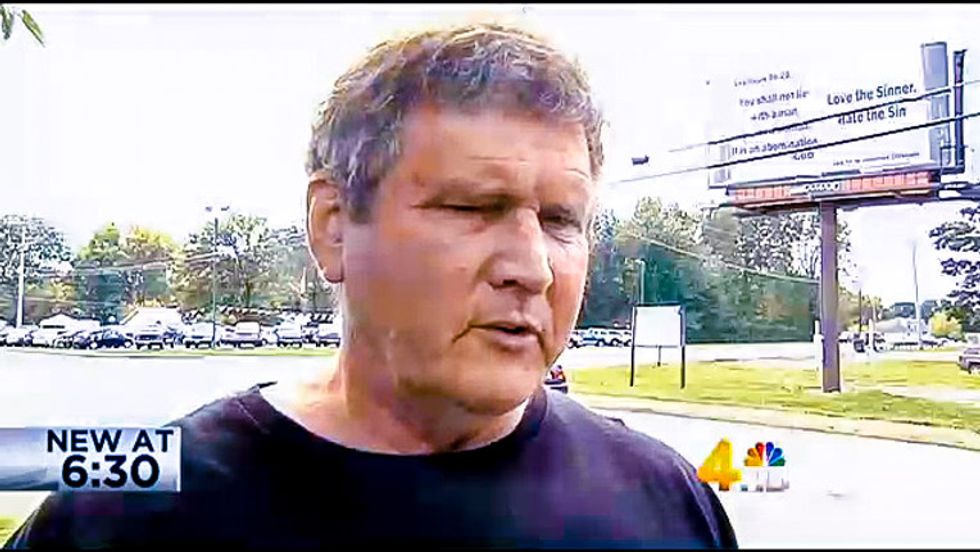 A Tennessee man and some of this friends have used their own money to fund a billboard to condemn homosexuality as an "abomination."

WSMV reported that Vietnam veteran Ronnie Monday of Portland, Tennessee had commissioned the billboard with the verse from Leviticus 18: "You shall not lie with a man as with a woman. It is an abomination."

Several chapters later, Leviticus also condemns LGBT people to death: "If a man lies with a male as with a woman, both of them have committed an abomination; they shall surely be put to death; their blood is upon them."

That part of the biblical message was not included in Monday's billboard.

"I just felt like something had to be done," he told the station. "I hate to see America turn their back on God."

"I thought God needs his voice out," he insisted.

Tennessee Equality Project Executive Director Chris Sanders acknowledged that Monday had a First Amendment right to put up the billboard, but questioned if the message was right for the community.

"We hate to see anything in a community that encourages that kind of divisiveness, picking on people," Sanders said.

The billboard has already been up for four months, and Monday just renewed the contract through at February.

"As for me and my house, we will serve the Lord. And he says it's wrong. And in my opinion, that's what it is, it's wrong," Monday argued.