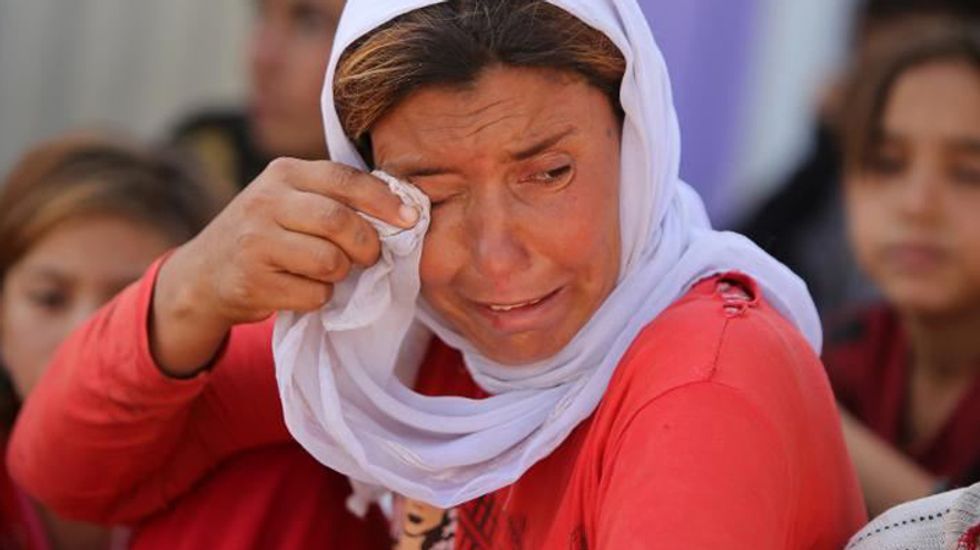 A displaced Iraqi Yazidi woman wipes her eyes at the Bajid Kandala camp near the Tigris River, in Kurdistan's western Dohuk province, where they took refuge after fleeing advances by Islamic State jihadists in Iraq on August 13, 2014 (AFP)

Imams call on David Cameron and others to stop using phrase, which they say gives credibility to a terrorist organisation

The prime minister and media should stop legitimising the terror group rampaging through Syria and Iraq by describing it as Islamic State, according to a coalition of imams and organisations representing British muslims.

Use of the jihadists' preferred title, they argue today, gives credibility to the Sunni militants and slurs the Islamic faith.

Signatories to a letter to David Cameron, including Sughra Ahmed, president of the Islamic Society of Britain, admit that British Muslims need to do more to dissuade their young men from being misled into taking part in the group's "hatred and poison". "We shall take every opportunity to continue to say clearly and loudly 'not in our name' and 'not for our faith,' " they write.

The letter's authors also call for the prime minister to reassess his own language. Cameron, with other senior politicians, has repeatedly made reference to the Islamic State, including during a Commons debate earlier this month.

Signatories including Mohammed Abbasi, from the Association of British Muslims, and Amjad Malik QC, president of the Association of Muslim Lawyers, write: "We do not believe the terror group responsible should be given the credence and standing they seek by styling themselves Islamic State. It is neither Islamic, nor is it a state.

"The group has no standing with faithful Muslims, nor among the international community of nations. It clearly will never accept the obligations that any legitimate state has, including the responsibility to protect citizens and uphold human rights.

"So we believe the media, civic society and governments should refuse to legitimise these ludicrous caliphate fantasies by accepting or propagating this name.

"We propose that 'UnIslamic State' (UIS) could be an accurate and fair alternative name to describe this group and its agenda – and we will begin to call it that."

The intervention marks an intensification of a campaign by prominent British Muslims to deter young men from seeking adventure with the militants. It follows a recent decision by Muslim leaders to issue a fatwa condemning British jihadists.

Six senior Islamic scholars endorsed the fatwa last month, describing Britons allied to Islamic State (Isis) cells as "heretics" and prohibiting would-be jihadists from joining the "oppressive and tyrannical" group in Iraq and Syria. It is feared that as many as 500 Britons have travelled to Syria or Iraq since 2011 to join the group and its affiliates.

In a letter seen by the Observer, the signatories add: "We believe that it would send a powerful message in Britain and around the world if you would join us, as our prime minister, in leading a national debate to seek a suitable alternative way to refer to this group and further challenge its legitimacy and influence.

"This could be especially powerful because everybody at home and abroad can see that you are being asked to do so by British Muslims themselves who want to be clear about why this group is so vehemently rejected.

"We are sure that most British Muslims would agree that 'UnIslamic State' is a considerably more fitting label for this poisonous group – and hope that our fellow citizens will join us in that.

"We know that this would be one small, symbolic step and that we must all work together to build the inclusion and integration in British society that would repel these poisonous ideas."

Dilwar Hussain from the New Horizons in British Islam charity, a group that works for reform in Muslim thought, and one of the 18 signatories of the letter to Cameron, said it was also important for British Muslims to be seen to be speaking out against the extremist views of men such as Anjem Choudary, who was interviewed by the Observer last week.

Choudary, a former lawyer linked to many Britons who have fought in Syria, and who acknowledges Isis leader Abu Bakr al-Baghdadi as "the caliph of all Muslims and the prince of the believers", claimed that US foreign policy was to blame for the beheading of American journalist James Foley.

Hussain, formerly a commissioner at the Commission for Racial Equality, said: "The risk is that to an unsuspecting public we give the impression that his views actually carry some weight among most British Muslims.

"Choudhary organises rallies to which a handful of people turn up. His views have been roundly condemned by Muslim leaders, imams and citizens up and down the country.

"He says he'd rather live there, in this so-called 'caliphate'. He's welcome to. But what we want to make very clear is that Muslims who like living here, in Britain, don't recognise his views, or those of Isis. That's not us and it's not our religion."