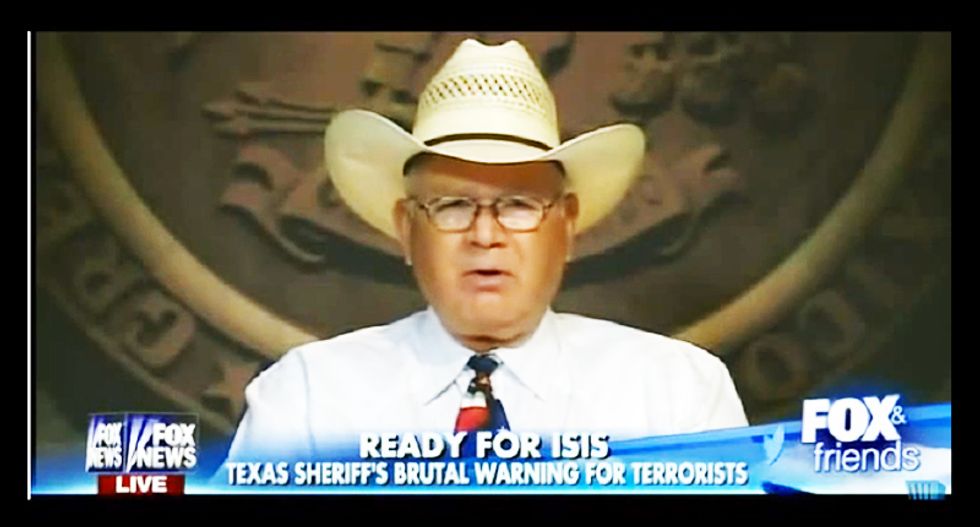 A Texas sheriff spoke to Fox & Friends host Elizabeth Hasselbeck this morning and warned her that members of the ISIS terrorist group, attempting to consolidate power in the Middle East, are also currently infiltrating the United States by sneaking over the border from Mexico.

Gary Painter, a sheriff from Midland County, Texas, had a warning for the would-be terrorists, saying, if they "show their ugly head in our area, we’ll send them to hell.”

Asked by Hasselbeck what he has been hearing in his law enforcement circles, Painter replied, "Well there's this report that says there are ISIS cells active in the Juarez area, which is the northern part of Chihuahua state. And that they were moving around over there and that they had, uh, just that there was some activity, and for the sheriffs along the border and law enforcement to be on the alert, and be on the look-out for these people trying to come across."

"Are you saying that ISIS is ready to come across, poised to perhaps execute what they have threatened to do, attacks on the United States, drown us in our own blood?” Hasselbeck replied. “Is that what you are saying?”

Painter explained that it was easy to walk or be smuggled across the border adding, "We have found copies -- our people along the border -- have found Muslim clothing, they have found Koran books that are laying on the side of the trail. So we know that there are Muslims that have come across, that have been smuggled into the United States.”

Hasslebeck asked the sheriff what his message would be for ISIS terrorist cells , and if he had any advice for the White House.

"If they show their ugly head in our area, we’ll send them to hell,” Painter warned, before adding, “I think the United States needs to get busy and they need to bomb 'em. They need to take 'em out. I would like for them to hit them so hard and so often that every time they hear a propeller on a plane or a jet aircraft engine, that they urinate down both legs.”

Watch the video below uploaded to YouTube by Better Top News: