TN pastor vows not to 'repent' for homophobia: God says gays 'must be put to death' 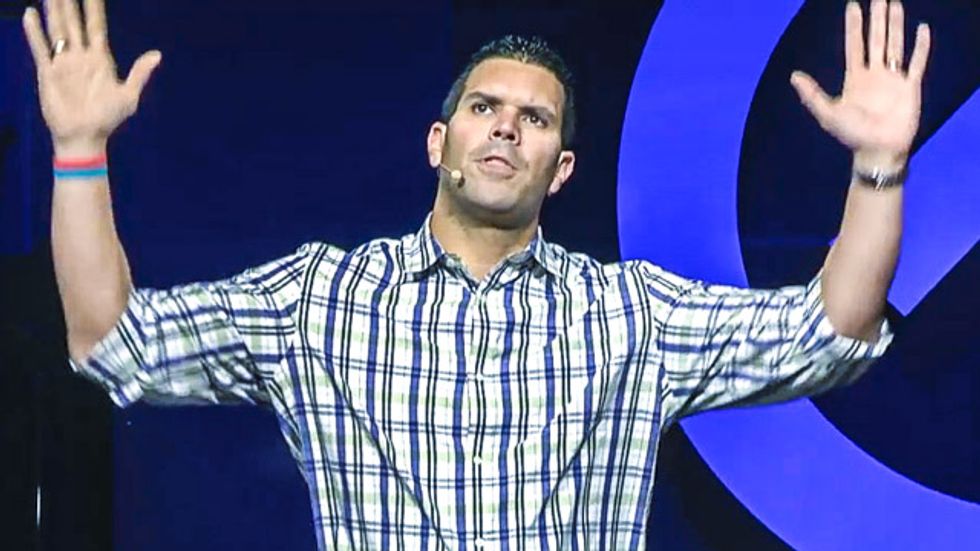 A pastor of a large Southern Baptist church near Chattanooga, Tennessee said this week that Christians would never repent for discriminating against gay people like they had for racism because African-Americans could not change the color of their skin.

After spending about 20 minutes recounting the perils of homosexuality throughout history, Gallaty asserted that the cities of Sodom and Gomorrah were destroyed by God because of gay sex.

"God said that the sins of the people had infected the very land in which they live," he explained. "So what happens to people who engage in this activity, this sexual immoral activity? Go to Leviticus 20, God gives us the punishment for engaging in these sins... 'If a man sleeps with a man as with a woman, they have both committed a detestable thing. They must be put to death. And their blood is on their own hands.'"

But the pastor noted that there was some good news in the New Testament of the Bible: God could turn gay people into heterosexuals.

"[The Bible says] some of you used to act like this, but now you've changed by the grace of God. You were washed! You have been sanctified! You have been justified in the name of the Lord Jesus Christ, and by the Spirit of God."

Gallaty went on to opine that "homosexuality is an attack on the family and the marriage."

"It's the most lethal attack we have today against the family," he insisted. "And if the enemy can ruin the family, he wins."

According to Gallaty, LGBT people "wear that homosexual badge as a badge of honor, it's an identifiable marker."

"Here's the problem with the argument that you closed-minded Christians, one day you're going to come full circle, and you're going to realize that you're being judgemental just like racism was 50 years ago," he remarked. "And we finally realized that racism was an issue for Christians."

Gallaty recalled that a gay member of the church had once come to him for advice because he was attracted to men.

"It's the same desire I had to get high and score dope years ago, it's a desire there," he admitted, recalling that he told that man that his "love for Jesus has to supercede any love on this planet, including men."

"For the glory of God and the honor of God in your body, you may have to remain single for the rest of your life," Gallaty told the church member. "The cool thing is this: God, over time, will heal you."

Watch the video below from Brainerd Baptist Church, broadcast Aug. 31, 2014.