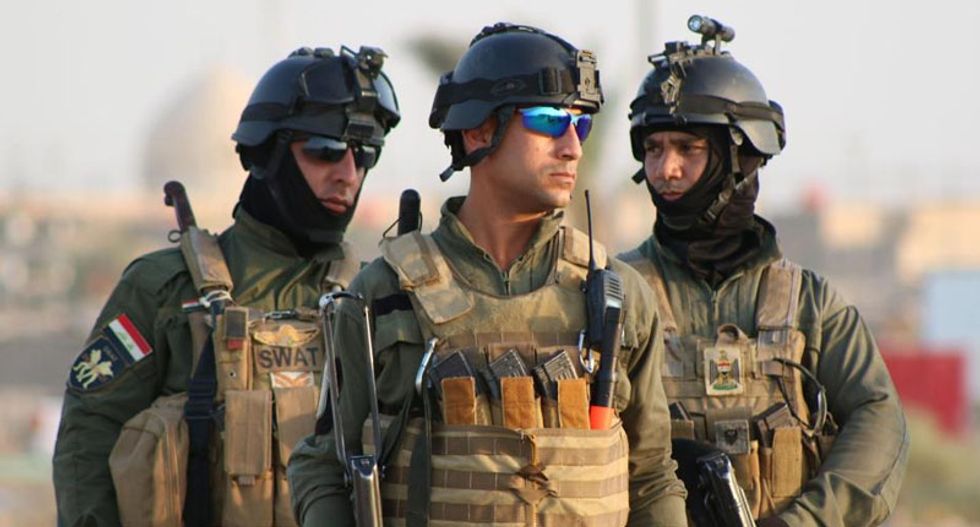 Iraqi special forces look on during a graduation ceremony for militiamen from the New Forces Regiment in the southern port city of Basra on September 9, 2014 (AFP Photo/Haidar Mohammed Ali)

The most senior U.S. military officer raised the possibility on Tuesday that U.S. troops might need to take on a larger ground role as they fend off Islamic State militants in Iraq, but the White House stressed there would be no combat mission for U.S. ground forces.

General Martin Dempsey, chairman of the U.S. military's Joint Chiefs of Staff, said there was no intention of placing American military advisers on the ground for direct combat. The U.S. plan relies on other contributions, including air strikes.

Still, he told a Senate hearing: "I've mentioned, though, that if I found that circumstance evolving, that I would, of course, change my recommendation."

Dempsey offered scenarios in which a larger role might be worthwhile, including embedding U.S. forces with Iraqis during a complicated offensive, such as a battle to retake the northern city of Mosul from Islamic State fighters.

"It could very well be part of that particular mission to provide close combat advising or accompanying for that mission," he said. "But for the day-to-day activities that I anticipate will evolve over time, I don't see it to be necessary right now."

U.S. President Barack Obama said last week he would lead an alliance to defeat Islamic State militants in Iraq and Syria, plunging the United States into a conflict in which nearly every country in the Middle East has a stake.

Obama ruled out the possibility of a combat mission that could drag the United States into another ground war in Iraq.

Responding to Dempsey's comments, the White House said Obama’s military advisers had to plan for many possibilities and that overall policy had not changed - that Obama would not deploy U.S. troops in a combat role in Iraq or Syria.

White House spokesman Josh Earnest told reporters Dempsey was "referring to a hypothetical scenario in which there might be a future situation where he might make a tactical recommendation to the president as it relates to ground troops."

Dempsey was testifying before the Senate Armed Services Committee, along with U.S. Defense Secretary Chuck Hagel, as the Obama administration makes its case to Congress for broadening operations against the Sunni militants, which would include U.S. air strikes in Syria for the first time.

NO "SHOCK AND AWE' IN SYRIA

Hagel said the military plan would be outlined to Obama on Wednesday by the U.S. Central Command. It envisions striking the militant group's safe havens to knock out infrastructure, logistics and command capabilities.

Dempsey said the strikes would degrade the group's capabilities as broader efforts get underway, including training of some 5,400 Syrian fighters in Saudi Arabia.

Congress is expected to approve this week a request from Obama for $500 million to arm and train moderate Syrian rebels, one part of his program.

"This won't look like a 'shock and awe' campaign because that's simply not how (the Islamic State group) is organized. But it will be a persistent and sustainable campaign," Dempsey told the Senate Armed Services Committee.

'Shock and awe' was a term popularly used to describe the initial air assault on Baghdad in the U.S. campaign to oust Saddam Hussein in 2003, and refers to use of overwhelming force to undermine an enemy's will to fight.

Still, Hagel acknowledged the number of Syrian fighters that could be trained over the course of the year would only put the opposition on the path to roll back Islamic State fighters.

"Five thousand alone is not going to be able to turn the tide. We recognize that," Hagel said.

The Senate hearing was repeatedly interrupted by anti-war protesters, shouting slogans such as, "There is no military solution." One protester was escorted out of the room while holding a sign that read: "More war = More extremism."

Senator Angus King of Maine, expressing concern that the United States would be drawn into interminable fights against extremist groups around the world from Iraq to Syria to Africa. said: "This is geopolitical Wack-a-mole."