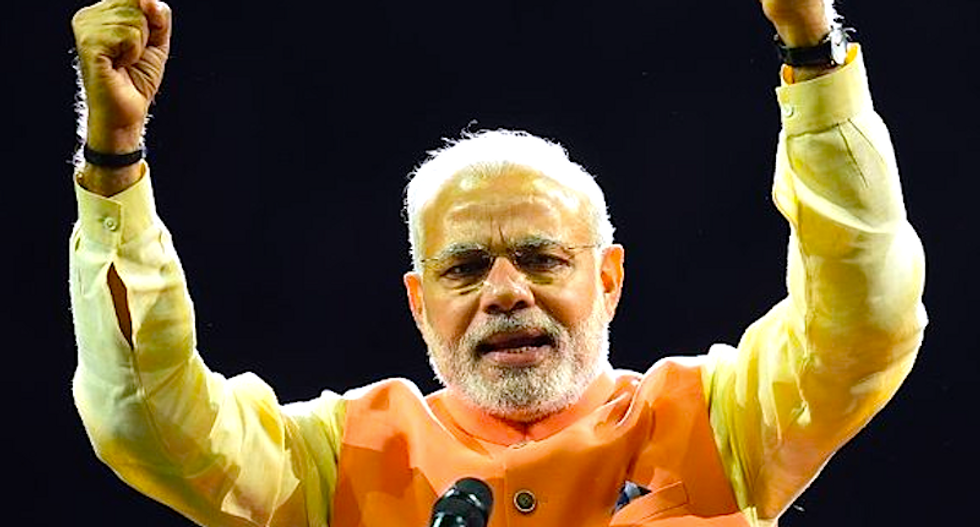 Indian Prime Minister Narendra Modi basked in a rock star U.S. welcome as he vowed to build a strong, confident country ahead of his first White House summit Monday.

In a massive show of support for a right-wing leader once shunned by Washington, some 18,500 people of Indian origin from across the United States and Canada packed Sunday into New York's Madison Square Garden, where they chanted his name and wore T-shirts bearing his picture.

He hailed Indian Americans for showing an example through their professional successes.

"There was a time when people thought that we were a country of snake-charmers," Modi said. "Our people used to play with snakes, but now they play with the mouse -- and that mouse makes the whole world run."

Modi promised to start lifetime visas for foreigners of Indian origin and, endorsing a proposal of the previous government without setting a date, to issue visas on arrival for US citizens.

"This kind of love has not been given to any Indian leader ever," he said of the Indian-American reception.

"I will repay that loan by building the India of your dreams."

Modi, who won India's widest electoral victory in three decades in April-May elections, fired back at critics who have urged him to launch quicker reforms as he recalled his humble background running a tea stall as a teenager.

"People ask for a big vision? Well, I got here by selling tea," Modi, speaking for an hour in Hindi without notes, said to thunderous applause.

"I'm a very modest man, and that's why I plan to do big things for modest people," he said, listing promises that include building more toilets and cleaning the Ganges holy river.

Pointing to U.S. leaders' statements that Asia will dominate the 21st century, Modi said: "And some say it will be India's century. India has the capacity to achieve that potential."

Sporting a vest in the saffron associated with Hinduism, Modi spoke from a slowly revolving stage in the storied arena that is home to the New York Knicks basketball team and a top destination for big-ticket musicians, with Billy Joel to play later this week.

In a touch reminiscent of U.S. political conventions, balloons fell as Modi finished his speech while he waved to a crowd that chanted in Hindi, "Long Live Mother India."

More than 30 U.S. members of Congress took part in the reception that warmed up with Bollywood and traditional dances. But from the start, the crowd chanted for Modi, leading an emcee to warn that the event was not a "campaign rally."

While foreign leaders often hold community receptions when visiting the United States, an event on the scale of Modi's is exceedingly rare, with only popes packing stadiums.

But U.S.-based supporters have campaigned for years to boost the image of Modi, who was refused a visa by the United States in 2005 on human rights grounds over anti-Muslim riots when he was leader of the western state of Gujarat.

Modi has denied wrongdoing and was never charged. The United States rushed to court Modi as it became clear he would take power, with Obama taking the unusual step of meeting him over two days.

In another shift, Modi met in New York with Israeli Prime Minister Benjamin Netanyahu in the first substantive meeting between the two countries' leaders in 11 years.

An upbeat Netanyahu said he was "delighted" to meet Modi and invited him to visit Israel, in what would be a first for an Indian prime minister.

"We are very excited by the prospects of greater and greater ties with India. We think the sky's the limit," Netanyahu said.

Modi proudly told Netanyahu of India's ancient Jewish community, saying that his was "the only country where anti-Semitism has never been allowed to come up and Jews have never suffered."

The last Hindu nationalist government in 2003 welcomed Ariel Sharon on the first-ever visit by an Israeli leader.

But the subsequent government of the Congress party, which leans left and enjoys strong support from the Muslim minority, avoided high-profile meetings even as trade and defense ties soared.