US-led military exercises due to begin in western Ukraine 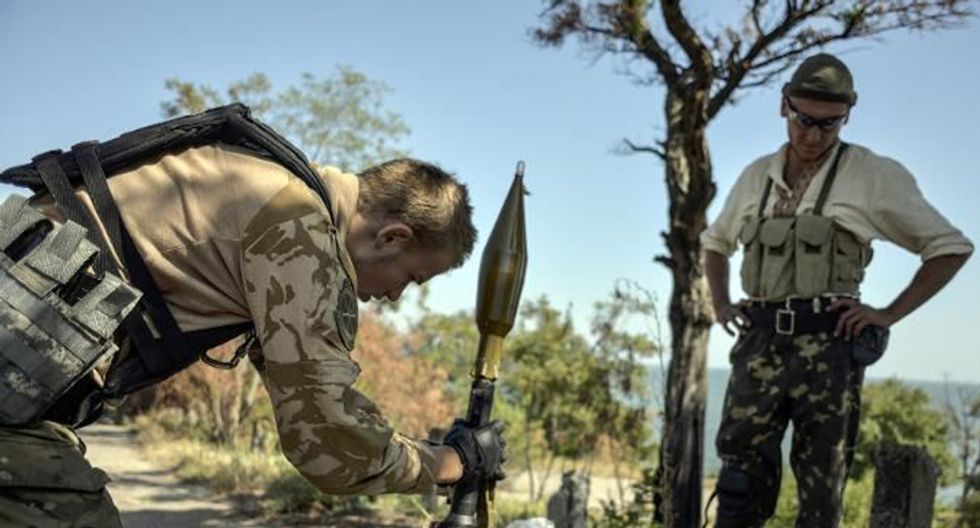 Ukrainian members of the volunteer Shakhtarsk battalion prepare a grenade launcher in the southern city of Mariupol, on September 13, 2014

US-led military exercises involving 15 countries were set to begin in Ukraine Monday, as fighting rumbles on in the restive east between government forces and pro-Russian rebels in violation of a ceasefire.

Heavy fighting erupted around the rebel stronghold of Donetsk in eastern Ukraine on Sunday, piling further pressure on a precarious nine-day-old truce between the government and separatist fighters.

Large clouds of thick black smoke billowed over the industrial city as the boom of sustained shelling and the rattle of automatic gunfire rang out throughout the day, AFP reporters witnessed.

Donetsk council said there had been civilian casualties and described the situation in the city as "critical" but gave no further information.

Kiev accused the rebels of jeopardising the truce by intensifying their attacks on government positions in eastern Ukraine, the scene of five months of deadly combat.

While Kiev and the West accuse Russia of playing a role in the rebellion in the east, soldiers from the 15 nations will begin military exercises dubbed "Rapid Trident 14" near Lviv in the west of the country.

The United States was expected to send around 200 troops to take part in the exercises, the Pentagon said earlier this month, in a show of solidarity with Kiev.

It will mark the first deployment of US ground troops to Ukraine since the Kiev government's conflict with pro-Russia separatists erupted earlier this year.

Sunday's fighting in the east appeared to be concentrated near Donetsk airport where the Ukrainian military said it had driven back an assault by insurgent fighters on Friday.

He also took aim at comments by two rebel leaders who both signed the 12-point truce deal in Minsk on September 5, but who declared on Sunday they were mere "observers" at the talks.

The ceasefire is seen as a first step in efforts to draw up a longer term peace deal to end a conflict that has cost more than 2,700 lives and set off the worst crisis in East-West relations since the Cold War.

President Petro Poroshenko has pledged to offer the eastern regions that form the economic backbone of Ukraine some limited self-rule, although the separatists say they want nothing less than full independence.

Rebels and government forces swapped dozens of captives also on Sunday in the latest exchange agreed under the accord, but the insurgents said Kiev's forces were still firing at them.

"From our side, nobody is shooting but they are breaking the rules, everybody in the world knows it," said a rebel commander defending a checkpoint near a village south of Donetsk.

The simmering crisis has exposed layers of mistrust between the West and Moscow and between the largely Russian-speaking populations in the east of Ukraine and the pro-Western leaders in Kiev.

The truce halted a rebel counter-surge across the southeast last month with the alleged support of Russian paratroopers and heavy weaponry that turned the tide of the war against Ukrainian forces.

NATO and Kiev say at least 1,000 Russian soldiers and possibly many more remain on Ukrainian soil although the Kremlin denies this.

Prime Minister Arseniy Yatsenyuk accused Russian President Vladimir Putin on Saturday of seeking to "eliminate" Ukraine as an independent country with the goal of resurrecting the Soviet Union.

Poroshenko heads to Washington this week to meet President Barack Obama, seeking to secure a "special status" with the United States as he steers Ukraine further out of Russia's orbit.

Obama has rejected direct military involvement but unveiled tougher economic sanctions on Moscow that -- together with similar EU measures -- effectively lock Russia out of Western capital markets and hamstring its crucial oil industry.

Russian Foreign Minister Sergei Lavrov accused Washington of trying to use the crisis to "break economic ties between the EU and Russia".

Russia on Saturday sent a 220-truck convoy it said was carrying aid to the residents of rebel-held Lugansk, who have been struggling without water and power for weeks.

Ukraine -- which did not give permission for the convoy to cross -- had expressed fears the trucks may be carrying supplies for insurgents and bitterly protested a similar delivery last month.

On the domestic front, cracks emerged in Poroshenko's administration when a deputy foreign minister quit over a delay in the implementation of an EU trade deal, apparently under Russian pressure.