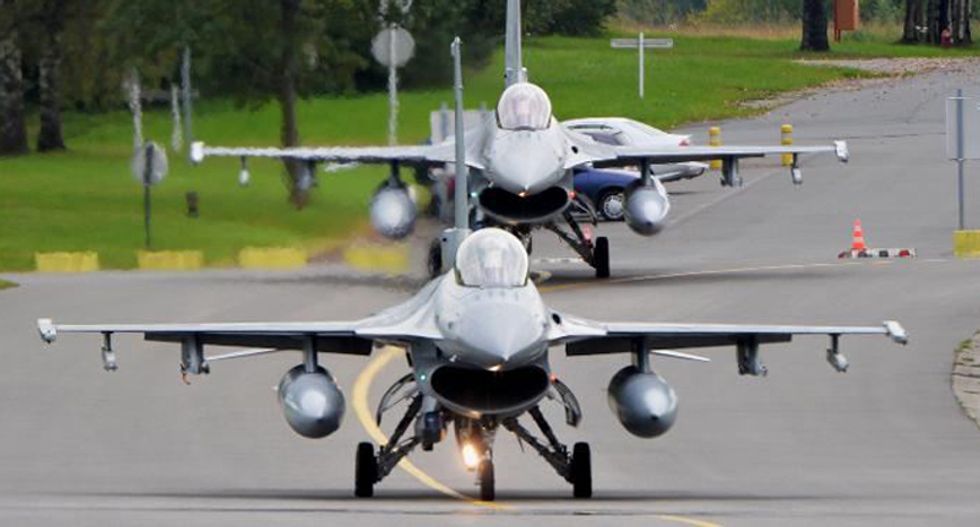 F-16 fighter jets prepare to take off from the Belgian military air base in Florennes on September 26, 2014 (AFP)

US aircraft were flying "near continuous" bombing raids against Islamic State militants in Syria, officials said, after Britain and two more EU nations agreed to join the US-led air armada.

The mission is now similar to US-led air raids undertaken in Iraq, with "near continuous" combat flight operations over Syria, a senior US defense official said.

"I can confirm US air operations are ongoing in Syria," the official added.

Belgium, Britain and Denmark earlier approved plans to join the war in the air, but Washington warned that up to 15,000 "moderate" rebels would need to be trained and armed to beat back the militants in Syria, where they have set up their de facto capital.

The Pentagon said air strikes -- which continued for a fifth day in Syria -- had disrupted lucrative oil-pumping operations that have helped fund the militants, but that a final victory, perhaps years away, would need local boots on the ground.

The White House welcomed the new European countries recruited to the Iraq operation, who are expected to add a total of 19 fighter jets in the air campaign over the country.

That would free up more US air power to strike targets in Syria, where American jets are already flying with warplanes from four allied Arab countries.

Britain's House of Commons voted by 524 lawmakers to 43 to back a motion authorizing air strikes in Iraq.

British Defense Secretary Michael Fallon said there would be no "immediate military action" but that it would be a "long, drawn-out campaign."

He welcomed "a lot of support" for military action in Syria as well, during a sometimes heated parliamentary debate.

Among the naysayers, opposition Labour MP Rashanara Ali, a spokeswoman on education, said she was stepping down from her post in the shadow cabinet in order to abstain from the vote.

"Too many mistakes have been made over the last decade and far too many people in conflict zones have had to pay a high price for misconceived actions by the UK and other countries," Ali said in a letter to party leader Ed Miliband.

Ahead of the vote, Prime Minister David Cameron told lawmakers that IS must be confronted.

"This is not a threat on the far side of the world. Left unchecked, we will face a terrorist caliphate on the shores of the Mediterranean," Cameron said.

Washington wants to build the broadest possible coalition including Sunni Arab allies to tackle IS, which has captured large areas of Syria and Iraq and declared an Islamic "caliphate."

But it has explicitly excluded Bashar al-Assad's Syrian regime in Damascus, favoring instead moderate rebel factions fighting both the government and IS extremists.

This led to criticism of the operation from Russia, whose Foreign Minister Sergei Lavrov told reporters at the United Nations that the US-led strikes are illegal unless coordinated with Syria -- a Moscow ally.

Bahrain, France, Jordan, Saudi Arabia, the United Arab Emirates and the United States have already been hitting IS targets.

The Netherlands is also sending six F-16 jets and will provide 250 military personnel and 130 trainers for the Iraqi military, and Greece said it would send arms to Kurdish forces in Iraq.

In recent days, Washington and its allies have targeted the funding sources of what US President Barack Obama has branded a "network of death."

The coalition has bombed oil refineries in eastern Syria where IS jihadists extract crude for sale on the black market, according to the Syrian Observatory For Human Rights, a British-based watchdog.

Experts say sales of oil from Syria and Iraq usually earn IS up to $3 million a day.

But now, according to activists in Deir Ezzor, Syria pumping has stopped.

The US is also planning to train and arm 5,000 Syrian rebels as part of the effort, although the top US military officer, General Martin Dempsey, said a force of between 12,000 and 15,000 would be required to recapture "lost territory" in eastern Syria.

The general said defeating the IS group would take more than air power and that "a ground component" was an important aspect of the US-led campaign.

"We believe the path to develop that is the Syrian moderate opposition," he said.

Britain and France have so far ruled out launching strikes in Syria but London "reserved the right" to intervene there in case of an imminent "humanitarian catastrophe."

The militant group's brutal abuses against civilians, rival fighters and Arab and Western hostages, as well as its success in recruiting Western members, have caused international alarm.

British police this week arrested 11 people suspected of links to Islamic extremists, including a notorious radical preacher who was released on Friday.

In Paris, hundreds of people answered a call by Muslim leaders to denounce the "barbarism" of Islamic State, as flags flew at half mast after the beheading of a Frenchman by an IS-linked group in Algeria.

The coalition strikes in Syria are reported to have killed at least 140 jihadists as well as 13 civilians.

In the most basic sense, a coup is an illegal takeover of government power by an individual or faction.

A coup can be attempted by members of the existing government and political system or those outside of it. A coup can also involve both groups working together towards the same goal of overthrowing the government.

Jolie McCullough, The Texas Tribune
"Dozens who died in Texas prisons during the pandemic had been granted parole, new report shows" was first published by The Texas Tribune, a nonprofit, nonpartisan media organization that informs Texans — and engages with them — about public policy, politics, government and statewide issues.

Last year, as the coronavirus killed hundreds inside Texas lockups and sickened tens of thousands more, prisoner rights advocates unsuccessfully pleaded for state officials to more quickly release the thousands of people in prison who had already been approved for parole.