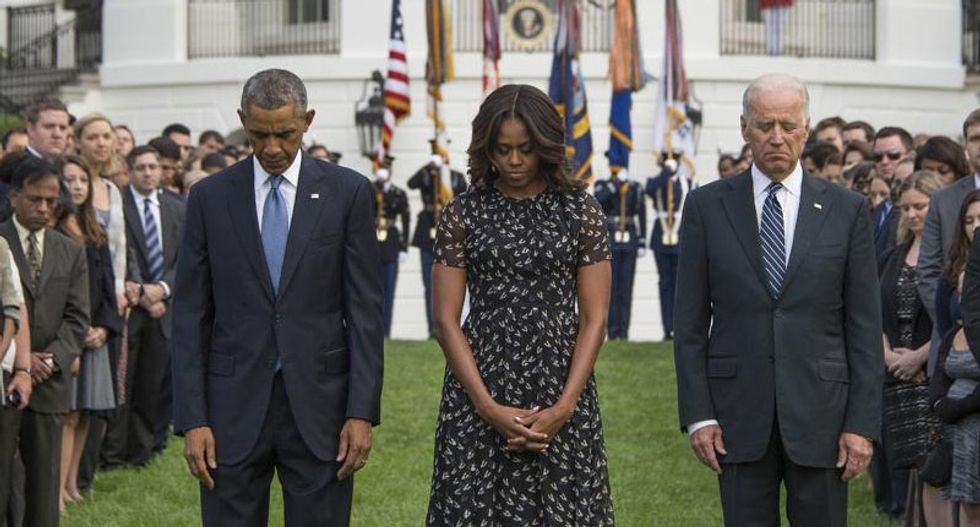 US President Barack Obama (L), First Lady Michelle Obama and Vice President Joe Biden (R) stand for a moment of silence on the South Lawn of the White House in Washington, on September 11, 2014 (AFP Photo/Jim Watson )

President Barack Obama on Thursday warned Americans "do not give in to fear" as he marked the anniversary of the September 11 attacks, hours after summoning his weary nation to a new war on Islamic extremism.

Obama and his wife Michelle solemnly observed a moment of silence at the White House, and then traveled to the Pentagon -- where a hijacked passenger jet plowed into the US military headquarters as Al-Qaeda brought horror to the US homeland in 2001.

The president said terror cells that turned four jetliners into fuel-laden bombs had done more than try to destroy signature US buildings, including the World Trade Center's Twin Towers in New York.

"They sought to break our spirit and to prove to the world that their power to destroy was greater than our power to persevere and to build," Obama said.

But the president said Al-Qaeda had underestimated US endurance.

"We carry on because as Americans we do not give in to fear. Ever."

The 13th anniversary of the attacks -- which killed nearly 3,000 people and pitched the United States into wars in Afghanistan, eventually Iraq, and a perpetual struggle against global terrorism -- was particularly poignant.

Only hours before, Obama delivered a national televised address in which he told Americans he intended to pursue a new, open-ended campaign against extremism in the Middle East, targeting Islamic State militants.

He said he was ready to hit IS targets in Syria for the first time, to reconstitute Iraq's armed forces and to train and equip "moderate" Syrian rebel groups, and to lead a broad international coalition to take on IS.

"Our objective is clear: we will degrade, and ultimately destroy, ISIL through a comprehensive and sustained counter-terrorism strategy," Obama said, using an alternative acronym for the rebel group.

But he was also at pains to stress that his approach would differ sharply from the large land wars launched by former president George W. Bush in the aftermath of the September 11 attacks and would look more like US counter-terror operations in Somalia and Yemen.

In effect, Obama is attempting to establish a framework for future presidents to wage war on terrorism in a way that does not drain US power or leave the country bogged down in hostile foreign lands.

Reaction to the president's speech was mixed, with Republicans grudgingly backing his toughened approach against IS, after the president admitted two weeks ago he did not have a strategy to combat the group in Syria.

But some key Washington players questioned the core goals of the president's strategy.

"He didn’t say we are going to do whatever it takes to defeat them," said Republican Senator Marco Rubio, a possible 2016 presidential candidate, referring to Islamic State.

"What if the Syrian rebels, no matter what we do, are not able to become a force that can confront them in Syria?" Rubio told CNBC.

"What if the Iraqi military forces don't come together fast enough?

"What if the Kurds are not able to move beyond the territory they control? Does that mean ISIL then gets to stay?"

But an important Obama ally, Democratic Senate Majority leader Harry Reid, said Obama had delivered a "stirring" speech and accused some Republicans of taking "cheap shots" at the president.

"Now it falls upon us, Congress and the American people, to rally behind President Obama and his decisive strategy," Reid said.

Obama has asked Congress to swiftly approve an operation to equip and train vetted Syrian rebels which he hopes can put pressure on IS inside Syria.

He first tabled a $500 million request for funding for the project in May.

Republicans accuse the White House of failing to provide operational plans for the training mission and say Reid has dragged his feet on existing legislation providing financing for the effort.

Obama, who ran for the White House in 2008 opposing "dumb wars," as he described the US invasion of Iraq, also faced some political fire from within his own Democratic Party over another US military escalation in the Arab world.

"The American people must be assured that we are not pursuing another open-ended conflict in the Middle East," said Senator Mark Udall of Colorado, who faces a close race in midterm elections in November.

Another Democrat in a tight race, Senator Mark Begich of Alaska, also opposed arming Syrian rebels -- using Obama's own previous argument that doing so would risk deadly weapons falling into the hands of extremists.

"The US can't continue to foot the bill of Middle East conflicts and the nations in the region need to step up in a meaningful way," Begich said.