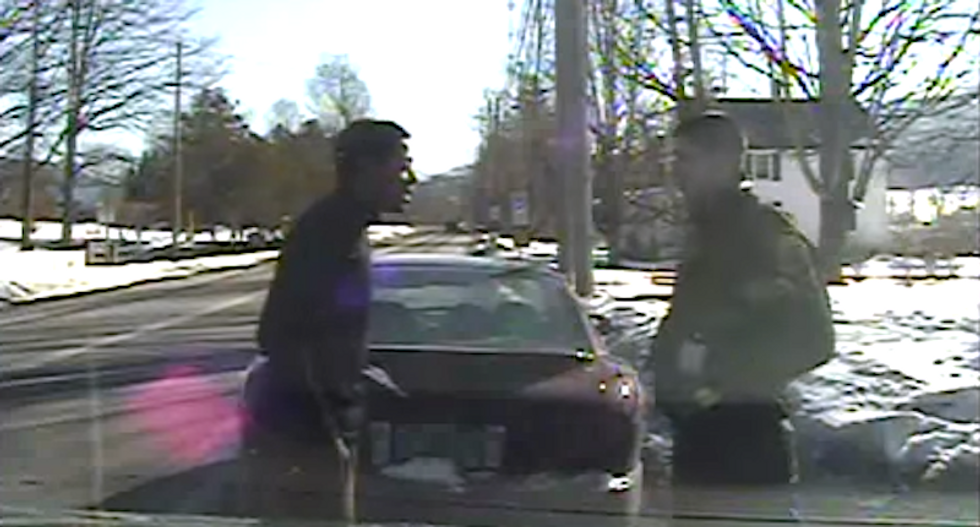 A Vermont state trooper seized a pot suspect’s car, forced him to walk home in the snow, pay for towing charges, and never charged the man, according to a new lawsuit.

Trooper Lewis Hatch pulled over 21-year-old Gregory Zullo on March 6 because snow covered a small portion of his license plate, the suit claims, although that is not a motor vehicle offense.

The suit, which was filed earlier this month by the American Civil Liberties Union, claims Hatch told Zullo he was patrolling for heroin dealers and repeatedly asked permission to search the car.

Zullo submitted to a pat-down outside his car, reported the Burlington Free Press, but he refused to allow a search of his vehicle.

Hatch told Zullo he should allow a search of his vehicle because the trooper’s police dog “smelled something,” reported the Times-Argus, although the dog was not trained to detect drugs and remained in the patrol car with the windows up.

Zullo refused to waive his rights, the Times-Argus reported, and Hatch said he would seize the car.

“I can smell weed and he won’t allow me to search, so I’m just going to take it,” Hatch told an unknown person in a telephone call recorded in his cruiser. “(It’s) stupid, but whatever – that’s what (Zullo) wants to do.”

The trooper called a tow truck to remove the vehicle, and the lawsuit claims Hatch told Zullo he could not retrieve his money and cell phone.

Hatch also refused to give him a ride, and the suit claims the trooper told Zullo that was “not (his) problem.”

Zullo was left to walk home eight miles in temperatures below 21 degrees – the high temperature for the day.

The trooper obtained search warrant for Zullo’s vehicle after reporting he smelled marijuana smoke and saw an air freshener and Visine inside, the suit claims.

Hatch also claims Zullo had a prior arrest for drug possession, but court records show only previous misdemeanor charges for simple assault and possession of stolen property – but both of those charges were dismissed.

Investigators found only a glass pipe with some marijuana residue and a grinder used to break up weed inside Zullo’s car, but no pot.

Possession of less than an ounce of marijuana in Vermont is not criminal under a 2013 law.

Zullo was not charged with any crimes in the case, but he was ordered to pay $150 in towing charges to claim his car from an impound lot.

“When Mr. Zullo asked (Hatch) why he had to pay for the tow, (Hatch) told him that the tow cost was Mr. Zullo’s fault for exercising his rights,” the suit claims.

The lawsuit seeks unspecified monetary damages and a declaration that the trooper’s actions were illegal.

Watch cruiser camera video from the incident posted online by ACLU of Vermont: