White House makes it official: U.S. is 'at war' with Islamic State 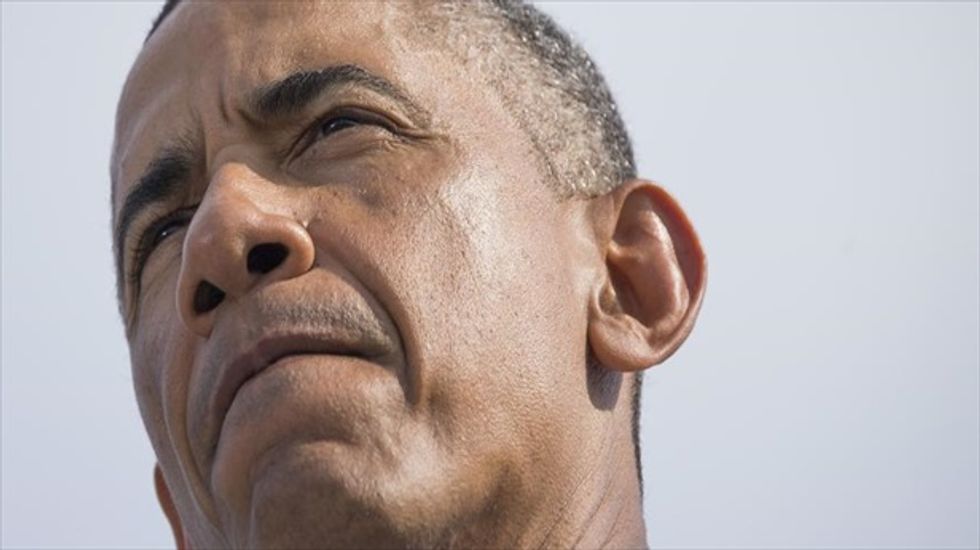 President Barack Obama speaks at the Pentagon in Washington, DC on Sept. 11, 2014 (AFP)

Washington (AFP) - The White House declared Friday the United States was at war with Islamic State radicals, seeking to rub out another semantic flap over its Syria policy.

In a series of television interviews Secretary of State John Kerry had appeared to be reluctant to term the expansion of U.S. operations against IS in Iraq and Syria as "war."

But pressed to clear up doubts about how President Barack Obama sees the conflict, the White House and Pentagon left little doubt.

"The United States is at war with ISIL in the same way that we are at war with Al-Qaeda and its al-Qaeda affiliates all around the globe," said White House spokesman Josh Earnest.

Pentagon spokesman, Rear Admiral John Kirby said that the US was not fighting the last Iraq war and used similar language to Earnest.

"But make no mistake, we know we are at war with ISIL in the same way we're at war and continue to be at war with Al Qaida and its affiliates," he said.

In interviews on Thursday, as he toured the Middle East building an anti-IS coalition, Kerry was reluctant to use the term "war" in referring to the U.S. campaign, telling people not to indulge in "war fever."

"I think 'war' is the wrong terminology and analogy but the fact is that we are engaged in a very significant global effort to curb terrorist activity," Kerry said.

The dispute over wording may seem trivial when Americans planes and drones have been pounding Islamic State targets in Iraq for weeks in more than 160 operations.

But it indicates the administration is skittish about using language that could alarm Americans weary of years of foreign conflict and who embraced Obama's vow to "end" the U.S. wars in Afghanistan and Iraq during two presidential election campaigns.

"The first thing that's important for people to understand is the president has made clear how the strategy that he is pursuing in Iraq and Syria to degrade and ultimately destroy ISIL is different than the strategy that was pursued in the previous Iraq War," said Earnest on Friday.

Obama's new strategy, announced in a prime time televised address on Wednesday, expands U.S. air strikes in Iraq against IS and envisages new action against the group in Syria.

In addition, Obama plans to train "moderate" Syrian rebels to take on IS and to reconstitute the Iraqi army, parts of which fled an IS blitzkreig across northern and western Iraq.

But he has insisted that there will be no deployments of US ground troops in the operation -- especially none that would recall the vast US land armies that were targeted by insurgents in the wars in Iraq and Afghanistan.

The debate over the word "war" is only the latest verbal kerfuffle to hamper Obama's attempts to clarify his increasingly under-fire foreign policy.

Two weeks ago, the president sparked a political storm by admitting he did not "yet" have a strategy for combating IS in Syria after the beheading of two US journalists.

Critics also accused the administration of seeking to "manage" the problem of Al-Qaeda rather than seeking to decimate it.

On Wednesday, Obama said that his goal was to "destroy" IS.

[Image: President Barack Obama speaks at the Pentagon in Washington, DC on Sept. 11, 2014. By Jim Watson for Agence France-Presse]