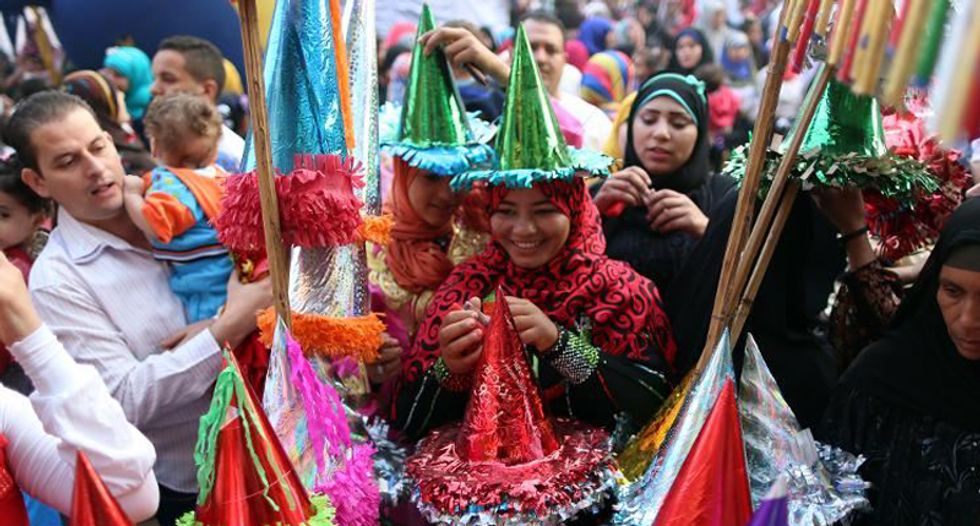 Egyptian Muslims families buy goods as they commemorate the first day of Eid al-Adha, or the Festival of Sacrifice, which marks the end of the Hajj pilgrimage to Mecca (AFP)

Two million Muslims ritually stoned the devil Saturday in the last major ritual of this year's hajj in Saudi Arabia, while fellow believers around the world celebrated Eid al-Adha, the feast of sacrifice.

The stoning took place in Mina, about five kilometres (three miles) east of the Grand Mosque in the holy city of Mecca.

Pilgrims had moved to Mina overnight Friday on foot, motorbikes, and buses from Mount Arafat after the hajj reached its zenith with a day of prayer, as well as tears by pilgrims moved by the sanctity of the spot where Prophet Mohammed is believed to have given his final sermon 14 centuries ago.

In the stoning ritual, pilgrims throw pebbles, which they collected at Muzdalifah on the way to Mina, at walls to emulate Abraham who is said to have stoned the devil at three locations when he tried to dissuade Abraham from God's order to sacrifice his son.

In conjunction with the stoning, pilgrims offer sacrifices by slaughtering a sheep, whose meat goes to the needy.

Nowadays pilgrims do not carry out this rite themselves, but pay agencies which distribute the meat to Muslims in many countries.

A total of about 1.5 billion Muslims around the world were celebrating Eid al-Adha with sacrifices of sheep, goats and other animals.

Like the stoning, this derives from the story of Abraham who was prepared to fulfil God's command to sacrifice his own son.

This year's hajj attracted just over two million believers including almost 1.4 million from abroad, according to statistics published by the official Saudi Press Agency.

The balance of almost 700,000 came from within the kingdom.

These numbers are roughly the same as last year.

The hajj has drawn a cross-section of humanity, everyone from presidents -- Sudanese leader Omar al-Bashir was among them -- to commoners including a wounded Syrian rebel war veteran, as well as rich and poor pilgrims alike.

The hajj, which officially ends on Tuesday, is the world's largest Muslim gathering.

It is one of the five pillars of Islam that every capable Muslim must perform at least once, the high-point of his or her spiritual life.