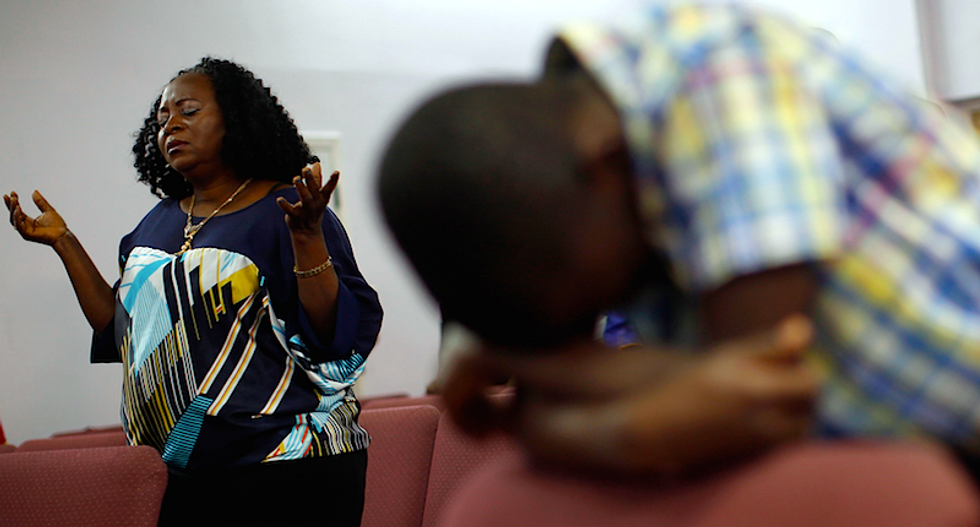 Parishioners pray during a church service dedicated to the victims of the Ebola crisis at New Life Fellowship Church in Euless, Texas (Reuters)

Some African immigrants in Dallas are worried that the case of a Liberian man who is sick with the Ebola virus in a city hospital is generating ill-feeling, including some taunts and finger-pointing, toward the wider community.

"Some people around here see us as bringing the disease and that's just not right," said a Liberian who asked to be called Sekou.

Some African immigrants in Dallas, while saying they are thankful to the United States and its people for taking them in, say handshakes are fewer and curious glances more frequent since Thomas Eric Duncan was admitted to hospital last month with Ebola. His was the first diagnosed case of the disease in the United States.

Duncan, who was visiting from Liberia when he fell ill, was staying in the melting-pot neighborhood of Vickery Meadow, home to about 25,000 people who speak more than 30 languages.

The Dallas case has put authorities and the public on alert over concerns that the Ebola epidemic could spread from West Africa, where it began in March and where it has killed more than 3,400 people. The epidemic has hit hardest in Liberia, Sierra Leone and Guinea.

Some immigrants from Somalia wearing traditional clothing that includes headscarves for women, say they have seen fingers pointed their way on the neighborhood streets.

"People are looking at us in a bad way. We didn't have anything to do with this. Somalia does not have Ebola. It is on the other side of Africa," said Shadiya Abdi, 27, an immigrant from Somalia.

At schools in Vickery Park, where five students who came in close contact with Duncan have temporarily stopped attending school, some of the other children of African immigrants have been branded 'Ebola kids'," said local politician Eric Williams.

In downtown Dallas, near where tourists gather at the site of President John F. Kennedy's assassination, an Ethiopian parking lot attendant who gave his name only as Ayob said a few people have started to see him as an object of suspicion.

"Some guy told me 'go get yourself quarantined'," he said.

Some U.S. politicians have called on President Barack Obama to consider a travel ban from the Ebola-hit countries, an idea condemned by Williams, who is running as an independent for a seat in the U.S. Congress from a south Dallas district.

"We have one diagnosed case and now there is a list of people who want to shut the borders to Africa," said Williams.

But a few see a silver lining, in that the Dallas case might focus the attention of the world's richest country on eliminating a disease that has killed thousands in some of the world's poorest countries.

"The best thing is to mobilize resources to contain the epidemic in West Africa," said Limerick Willie, a Liberian native who has lived in Texas for decades and now heads Dallas African Charities.

There were nearly 2 million people in the United States who came from sub-Saharan Africa, according to 2010 U.S. Census data.