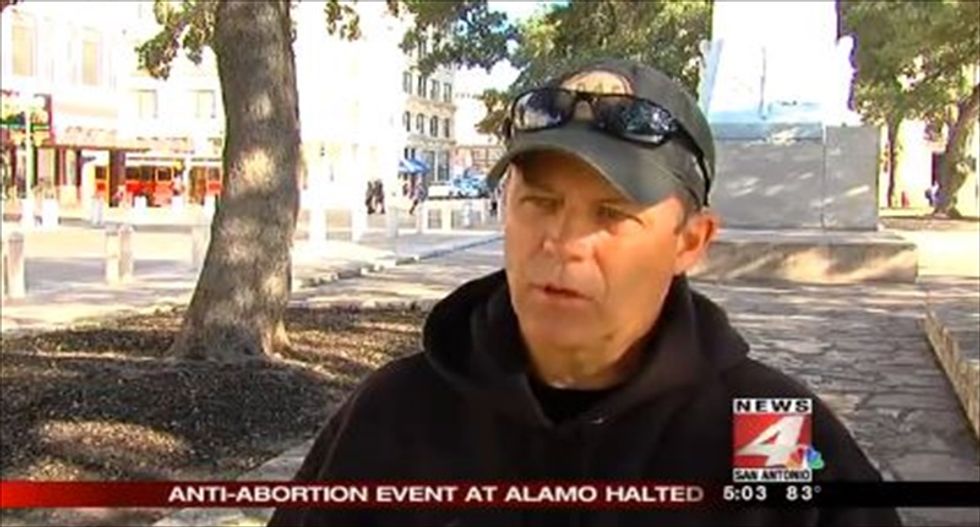 An anti-abortion group based out of Ohio is threatening to sue officials in San Antonio, Texas after it was blocked from using a large "Jumbotron" monitor to show abortion footage at a historic park.

"What we think is that the city is involved in content-based or view-based discrimination," Created Equal director Mark Harrington told WOAI-TV on Wednesday.

Harrington's organization partnered with a local ministry to put together an anti-abortion demonstration at Alamo Plaza. Originally, he said, the groups received permission to set their display up and included screenshots of the images they intended to use.

However, the permit was revoked on Tuesday night, and local police told the group that it could be fined if it put the screen up. Chief William McManus did say that Created Equal was free to distribute literature at the plaza.

The city's development service director, Roderick Sanchez, told WOAI that he pulled the group's permit because of a city code barring "digital or portable signs" in historic locations like the plaza.

"We have one department that issues event permits," Sanchez said. "They issued the permit for an event, not knowing that there was a separate sign code which our department enforces."

The San Antonio Express-News reported that local officials are considering formalizing policies regarding demonstrations at the plaza.

"Right now, the plaza lends itself to a variety of uses, some of which are innocuous and some of which are, as you saw [on Wednesday], potentially more inflammatory," city council member Diego Bernal said. "I don't think government should act as a censor, but at the same time, as I've said all along, the Alamo certainly deserves better than what we've shown. And at the very least, it deserves something definitive."

Watch WOAI's report, as aired on Wednesday, below.