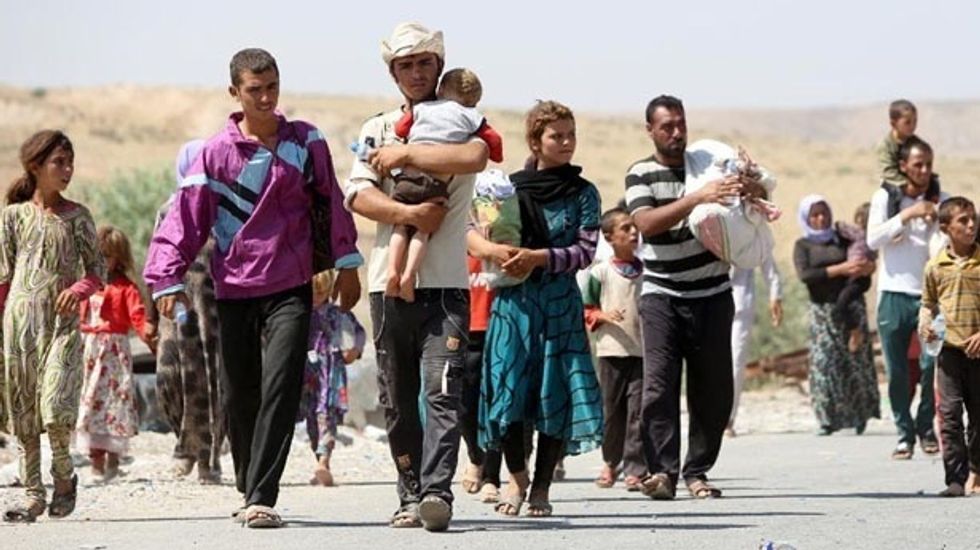 More than $1bn earmarked for the reconstruction of Iraq was stolen and spirited to a bunker in Lebanon as the American and Iraqi governments ignored appeals to recover the money, it has been claimed.

Stuart Bowen, a former special inspector general who investigated corruption and waste in Iraq, said the stash accounted for a significant chunk of the huge sums which vanished during the chaotic months following the 2003 US-led invasion.

Bowen’s team discovered that $1.2bn to $1.6bn was moved to a bunker in rural Lebanon for safe keeping – and then pleaded in vain for Baghdad and Washington to act, according to James Risen, a journalist who interviewed Bowen for a book, Pay Any Price: Greed, Power and Endless War , to be published this week.

“Billions of dollars have been taken out of Iraq over the last 10 years illegally. In this investigation, we thought we were on the track for some of that lost money. It’s disappointing to me personally that we were unable to close this case, for reasons beyond our control,” Bowen said in an excerpt from the book published by the New York Times on Sunday .

The disclosure of the bunker shines a light on one of the occupation’s murkier puzzles: the fate of pallets of shrink-wrapped $100 bills which the Bush administration loaded on to Air Force C-17 transport planes in order to prop up the occupation of post-Saddam Hussein Iraq. About $12bn to $14bn was sent in the airlift and another $5bn via electronic transfer.

Bowen, a Texan friend of the president, was appointed in 2004 to investigate reports of corruption and waste in Iraq. He spent close to a decade chasing leads, until his office closed last year.

An investigation, codenamed Brick Tracker, struggled to uncover details of the transfer, said Bowen, who told Risen: “I don’t know how the money got to Lebanon. If I knew that, we would have made more progress on the case.”

Washington had long since forgotten about the cash and shrugged when informed about his discovery, he said. The CIA expressed little interest, the FBI said it lacked jurisdiction and the US embassy in Beirut denied his team permission to visit the bunker, because it was too dangerous.

“We struggled to gain timely support from the interagency as we pursued this case,” Bowen said.

One reason for such indifference, Bowen believed, was because it was “Iraqi money stolen by Iraqis”.

The money came from the Development Fund of Iraq, which was created by a May 2003 United Nations resolution to hold Iraqi oil revenue, and was originally held in a New Jersey facility run by the Federal Reserve Bank of New York.

Bowen said he spoke to Iraq’s former prime minister, Nouri al-Maliki , about the bunker but that Baghdad made no effort to retrieve the cash. Lebanon’s prosecutor general, Said Mirza, initially agreed to co-operate in an investigation but later backtracked, he said.

Frustration with official indifference appears to have prompted Bowen’s decision to speak out publicly for the first time. Since his office shut down he has moved to the private sector.

The perception of graft and illicit fortunes in the reconstruction effort fuelled cynicism about and hostility to the US-led occupation of Iraq.

Paul Bremer, who was the head of the Coalition Provisional Authority which ruled Iraq in the occupation’s early days, defended his agency’s handling of the funds, including the 11th-hour rush of $4bn to $5bn to Baghdad in June 2004, just before the CPA shut down.

The Iraqi government “was broke at that point” and funds were urgently needed, Bremer told Risen, a Pulitzer-winning reporter for the New York Times who could face jail over his refusal to reveal a source and testify against a former CIA agent accused of leaking secrets.

“The issue is what happened to the money once it was distributed through the minister of finance. We had a very clear record of funds going to the Iraqi system.”

Bowen challenged that defence, saying there were few credible records of how the money was spent. “Our auditors interviewed numerous senior advisers of the CPA, and we learned from them that the controls on the Development Fund of Iraq money were inadequate,” he said. “We didn’t make this up; we learned this from CPA staff.”

Bowen said he suspected some, possibly all, of the money had since been moved from the bunker.