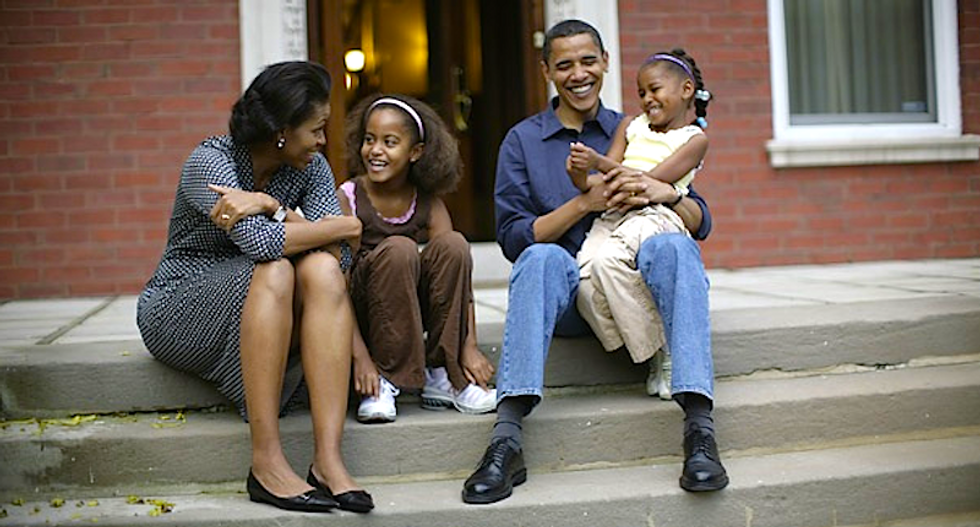 The birther fringe has been touting some highly dubious “evidence” that Michelle Obama was born a man and so is biologically incapable of being the mother of her own children.

The conspiracy theory is based on the alleged lack of publicly available photos of Barack and Michelle Obama’s daughters, Sasha and Malia, when they were babies or very young – although adherents freely admit the First Family prefers to limit the girls’ exposure to the media.

“Barack Obama and the First Lady have kept a tight lid on photos of their precious daughters being released by the press,” writes Jodi Swann at Mr. Conservative. “Still, we have seen a startling lack of pictures from the early years of Malia and Sasha. Now we have evidence that this may not be due to the fact that Michelle has ordered the press not to release them, but that they do not exist.”

She cites a blog post from last year at Fellowship of the Minds that speculates the girls were adopted – “possibly from Morocco.”

That blogger, who goes by the name Dr. Eowyn, claims to have performed a Google image search for baby pictures of the girls and found none, although the blog’s readers found several that were quickly dismissed as obvious forgeries.

Dr. Eowyn also noted that Ancestry.com and Genealogy.com, which the blogger paid $9.95 for a trial membership, turned up no birth records or other personal information about the president’s minor children.

Birther litigant Orly Taitz claimed to Dr. Eowyn she has proof at least one of the girls was adopted from Morocco.

The conspiracy clearinghouse Before It’s News posted an “exclusive” report last week claiming Michelle Obama was born a man, based almost entirely on a June 30, 2011, story on the satirical ChristWire website.

The site claims a former White House staff member shared the information about Michelle Obama’s background, and included a quote that reads the way anonymous sources sound when their voice is obscured in television interviews.

“I just can’t go to the major alphabet networks,” the source claimed. “They are in the tank for Obama and it is network policy to cover up any critical stories regarding the President and his family. The White House has officially created a State media.”

The conspiracy theorists claim the First Lady’s parents were a “well known cocaine dealer and union thug for Crime Lord/Mayor Richard J. Daley” and “a transient street prostitute who was diagnosed with the HIV virus in 1998.”

The rest of the "exclusive" Before It's News report is a reposting of a viral story that borrows the lede from a since-corrected Chicago Sun-Times report about the cemetery where her father is buried.

The conspiracy theorists claims “Michael Robinson” accepted a scholarship in 1982 to play middle linebacker for Oregon State, where he enjoyed “a respectable rookie season with 88 tackles and 7.5 sacks (but) suddenly dropped out of the school.”

The report is accompanied by a laughably doctored photo of football players wearing single-bar helmets and uniforms from the 1950s.

Another blogger, who still insists the conspiracy theory is true, determined someone had inserted Michelle Obama’s face into the photo at YearbookYourself.com.

“Fellow teammates observed that Robinson could regularly be heard lamenting over how he is a ‘woman trapped inside a man’s body,’ and on January 13th, 1983, he underwent sex reassignment surgery at Johns Hopkins University School of Medicine,” the viral report claims.

The future First Lady then left Oregon State for Princeton University to “hide the shame of his new identity,” the report claims.