California candidate insists his neo-Nazi past is behind him: 'I'm not a hater' 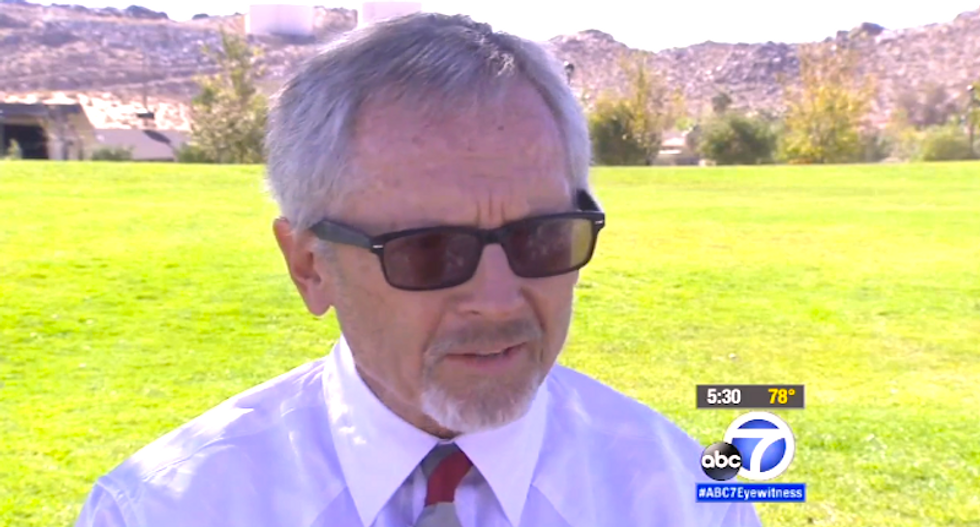 The former leader of a white supremacist church hopes voters can forget about his past and elect him to a town council in southern California.

Richard Bunck is vying for a seat on the Apple Valley Town Council, where he hopes to reduce water rates and help balance the city’s budget.

But a councilman from a neighboring town is reminding voters of Bunck’s past association with the neo-Nazi Christian Identity movement.

"Getting a man like Richard Bunck elected, who is a known, practicing neo-Nazi will bring disgrace, dishonor and horrible publicity for the High Desert," said Russ Blewett, a councilman in nearby Hesperia.

Bunck dismisses the criticism, saying he left the organization after nine months about 40 years ago because he disagreed with its rhetoric and activities.

Bunck inherited a church 10 years ago that was listed as part of the white supremacist Christian Identity movement by the Southern Poverty Law Center.

Bunck claims that church is no longer active, but he does hold Bible studies at JHM Baptist Church – founded by and named after his mentor, American Nazi Party founder Rev. John Hale McGee.

“My spiritual mentor was a friend for many years, but we often disagreed on political philosophy, as friends often do,” Bunck wrote in an op-ed published by the Hesperia Star.

Bunck and his church have recently been buying up property in Rachel, Nevada, near the classified Area 51 military base, closing down businesses and evicting residents.

He explained in the op-ed that he may possibly use the land to build a summer camp for underprivileged youth, although he did not offer any specific details.

Bunck explained that he was asked to join a student organization – identified in media reports as the National Socialist White People’s Party – while attending the University of California, Irvine, in the early 1970s that he now wishes he had not.

“The only way I’ve been able to learn is to jump into something,” Bunck said.

He told the Hesperia Star that another member urged him to put his own race first in the social justice activism he engaged in at the time.

“I was there not out of hatred but because I wasn’t ashamed of who I was,” he said. “No one should be.”

Bunck -- who identifies his heroes as John F. Kennedy, Ronald Reagan, and Howard Jarvis, the “father of Prop 13” – successfully prevented passage of a tax measure 15 years ago in Claremont with the late McGee, and both men ran for office.

He hopes voters focus on that, instead of his brief membership in a neo-Nazi group and decades-long association with McGee – who claimed during his own 1999 campaign for office that he associated with skinheads and Nazis to lead them toward Christianity.

“After witnessing hatred head on, I left that organization and never returned,” Bunck said. “I renounced that group’s ideology and I say clearly now that I am opposed to discrimination, hatred, and supremacy of any kind.”