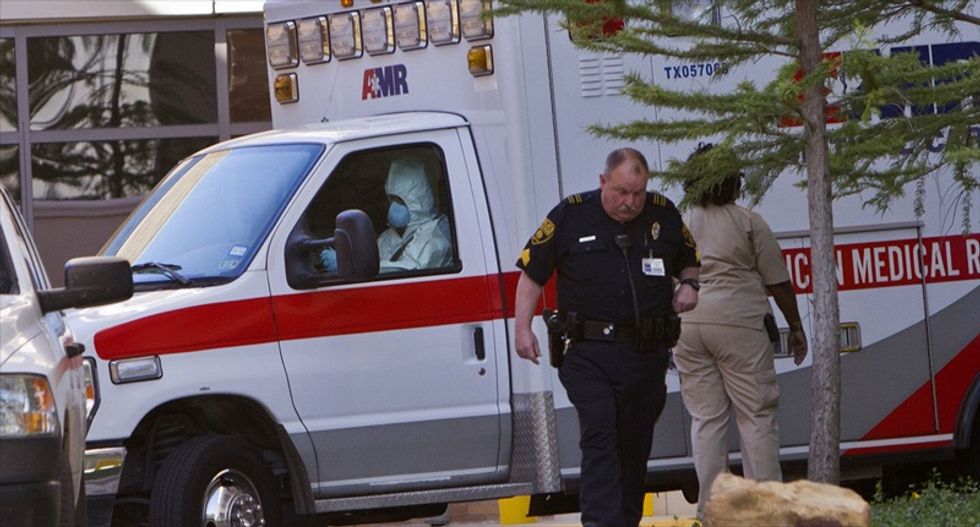 An ambulance driver wearing a protective suit escorts Amber Joy Vincent (not shown), the second health worker to be infected with the Ebola virus at Texas Health Presbyterian Hospital to the airport in Dallas, Texas on Oct. 15, 2014. Photo by Jaime R. Carrero for Reuters.

The second Texas nurse to test positive for Ebola made a quick weekend visit to northern Ohio to plan a wedding and appears to have had little contact outside of a small number of friends and family, health officials said on Wednesday.

"We are still in the process of confirming, but she had little mobility and travel," said Donna Skoda, spokeswoman for the Summit County Health Department. "She came to visit her parents' home and stayed there."

Skoda said that as of Wednesday evening officials had been able to confirm Amber Vinson had contact with fewer than 10 people and one family member has gone into a self-quarantine. Her mother has gone to Texas, Skoda said.

Summit County Public Health has not identified any public events or large public gatherings Vinson attended in the county or any surrounding counties, it said in a statement.

Vinson took a flight to Cleveland Hopkins International Airport, which serves north central Ohio, on Friday from Dallas and returned to Texas on Monday, the day before she was diagnosed with Ebola, officials said.

A federal source told Reuters on Wednesday that Vinson had informed the CDC that she had a slight temperature before boarding the flight on Oct. 13 but was not advised against flying.

Vinson is related to three Kent State University employees, who have been told to stay away from campus for three weeks and self-monitor under U.S. Centers for Disease Control and Prevention protocols, the school said.

She stayed with family in the Akron suburb of Tallmadge but never set foot on the Kent State campus in Kent, Ohio, during her brief visit to northern Ohio, officials said.

Kent State President Beverly Warren said Vinson's relatives were on the campus after they had contact with her but left when they learned she tested positive for Ebola.

There are no plans to sanitize or decontaminate areas that the three employees might have come in contact with, said Dr. Angela DeJulius, the university's chief physician.

Vinson was in the Akron area to prepare for a wedding and was visiting her mother, Toinette Parrilla, director of the Cleveland Department of Public Health, told a news conference.

Vinson, who had cared for the Dallas Ebola patient who died, did not show symptoms of Ebola on the flight back to Dallas, according to the flight crew, the CDC said.

Still, workers at the Cleveland airport were wearing gloves on Wednesday and the jet way, gate area, walkway and restrooms in the concourse that handled Monday's flight were disinfected, said Ricky Smith, Cleveland's director of port control.