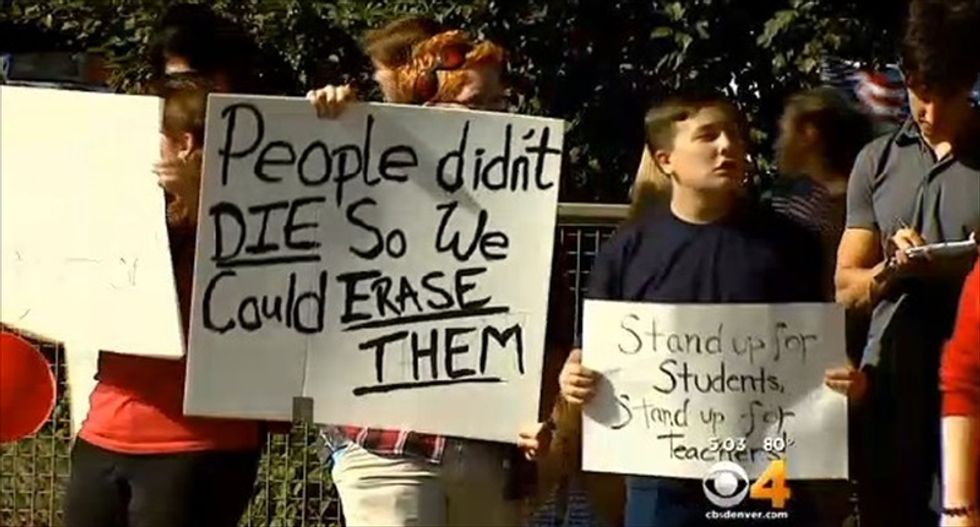 A Colorado school board's vote to review advanced placement curriculum in the state's second-largest district drew more criticism on Friday, despite removing wording from a proposal that triggered student walkouts and teacher sick-outs.

The Jefferson County Board of Education became the focus of a national debate between conservatives and liberals over education standards when it proposed forming a committee to review the curriculum of an Advanced Placement history course that is a mainstay of U.S. students heading to elite colleges.

After a heated meeting on Thursday, and in a move billed as a compromise, the conservative school board in the suburban Denver district approved the formation of a panel to review all district curricula, instead of just the history course, and said it would include student perspectives.

A proposal originally floated by conservative board member Julie Williams had called for a review of the Advanced Placement History's framework, which she said focused on negative aspects of U.S. history while downplaying its merits.

Critics said the changes amounted to no more than window dressing, with board member Lesley Dahlkemper, who opposed the committee's formation, saying she had concerns about the open-ended nature of the panel's mandate.

“It does make me wonder if AP History is first, is AP Literature next?” Dahlkemper said, adding she was encouraged that at least the committee will include students.

The original proposal had spawned student walkouts at nearly all of the district's 17 high schools, and four high schools were closed for a day when large numbers of teachers in the 84,000-student district called in absent.

But the specific language about the history curriculum was removed from the proposal before Thursday's meeting, in which the board approved forming a general content review committee by a 3-2 vote.

“It's still the same thing,” said Michele Patterson, president of the Jefferson County Schools parent-teachers association, who spoke out against the measure. “They have made their agenda clear: here comes creationism.”

Messages left on Friday for Williams and two other conservative board members were not immediately returned.

No student walkouts or widespread teacher absences were reported on Friday, a school district spokeswoman said. But Support Jeffco Kids, a group critical of the board, planned demonstrations for late Friday afternoon while another group said on its website it was organizing a counter demonstration.