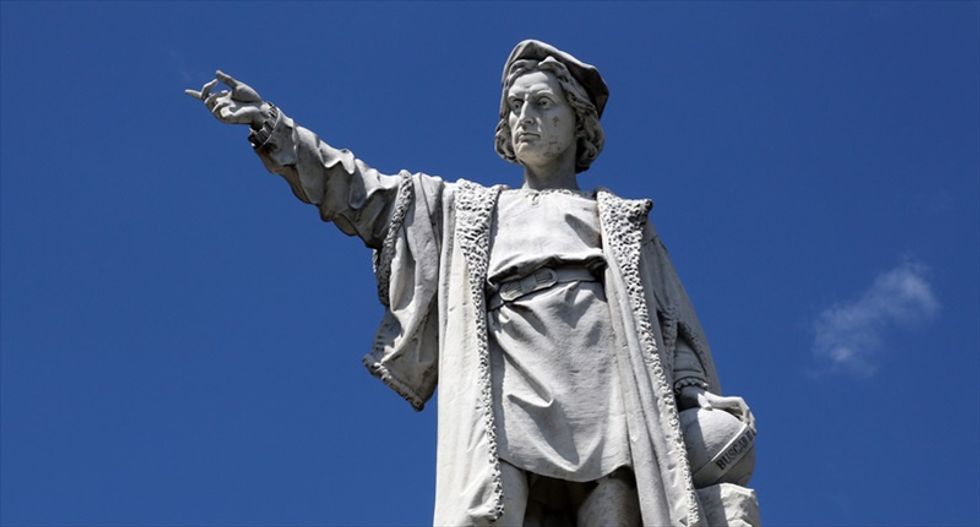 As some cities and states phase out Columbus Day in favor of a holiday honoring indigenous people, conservatives are hyping the famed explorer as a Christian warrior who battled Islam.

Recent historical scholarship has focused on the cruelty Christopher Columbus visited upon the indigenous people he encountered during his exploration.

That leaves his reputation ripe for a “politically incorrect” revision.

“It’s time for a little trek through history because Columbus’ achievement is relevant to where we are today,” wrote Allen West, the conservative commentator and former Republican congressman. “To understand his achievement, we need to put the whole episode into context.”

West notes that Columbus set out on his voyage the same year the Moors were finally driven from Spain after nearly 800 years, and about 40 years after the fall of Constantinople into Ottoman hands.

“So the man from Genoa … stepped forward not only to challenge the belief that the world was flat, but to find a westward route by sea to the Indies and China,” West argues. “With the defeat of the Islamic armies, Columbus believed he could find favor with Ferdinand and Isabella, and indeed Isabella took a liking and supported Columbus’ endeavor. So we can thank Islamic conquest for inspiring Columbus to find a new trade route west."

However, most educated people in Europe and the Muslim world were aware of ancient proof that the world was round, and some scholars claim African and Muslim explorers had reached the New World centuries before Columbus.

His conservative champions don’t exactly dispute that Columbus enslaved the natives he met in the West Indies, but they argue that was more merciful than simply killing them – and besides, they insist, he was doing God’s work.

“He did do some things that weren’t right but his motives overall were, number one, to get gold to free Jerusalem but secondly to share the Gospel,” said Kenyn Cureton, vice president of the Family Research Council, during a radio interview this week.

Cureton told “Washington Watch” on Tuesday that Columbus had become a target for liberals because he shared the Gospel with the natives he enslaved.

“He was very much motivated by his Christian faith, and I think that is what is behind this effort to wipe his name out from history,” Cureton said.

Their claims appear to be based, at least in part, on arguments made in a 2011 book claiming that Christopher Columbus voyaged to the New World to finance a new Crusade to retake Jerusalem from Islamic rulers.

Other historians, however, argue that Carol Delaney, author of "Columbus and the Quest for Jerusalem,” based her claims on dubious sources and was guilty of "sensationalizing history by linking it with contemporary events."

That seems to be what most appeals to West.

“Today we celebrate and remember this Italian explorer who realized the world needed a new trade route because of Islamic conquest,” West wrote. “And here we are today, some 1400 years later, still confronting Islamic conquest by violence, displacement of other indigenous religions by Islam, and the establishment of a caliphate.”

“We thank Christopher Columbus, but now the world needs another Charles Martel,” he added, referring to the medieval warrior who turned back the Muslim conquest of Europe and set the stage for his grandson, Charlemagne, the first Holy Roman Emperor.