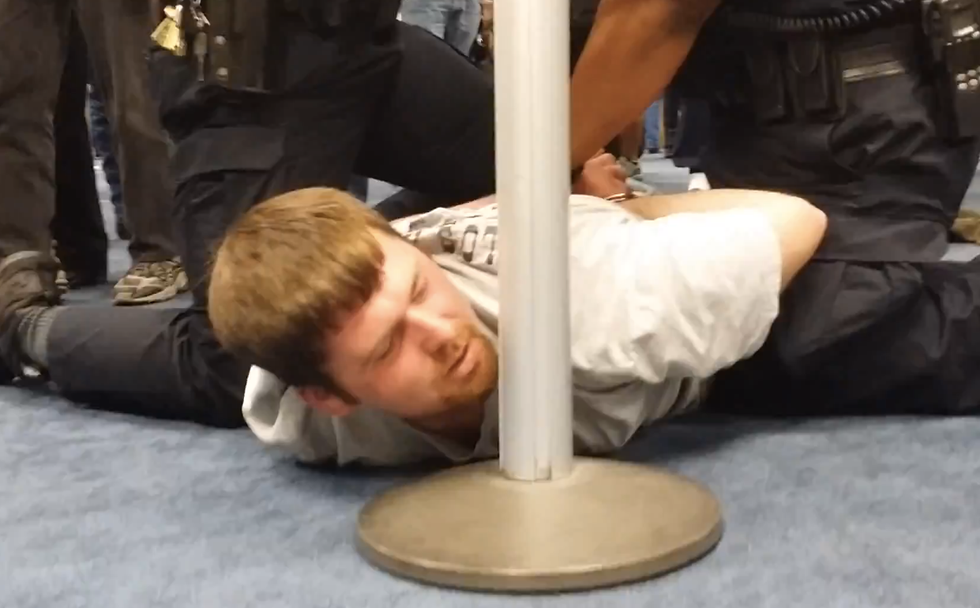 The man seen attacking a passenger he thought was gay in a video filmed at the Dallas Airport -- McCleish "Mac" Christmas Benham, 27, of Shelbyville, Tennessee -- had prior criminal charges against him for theft and animal abuse.

According to DallasVoice.com, Benham was charged with public intoxication and simple assault after the attack, which took place on Thursday, Oct. 23 and went viral in the following days.

Police reports say that Benham had become agitated while speaking to a female airline staffer at the gate for his flight. He became progressively more belligerent, cursing and shouting until a man the report referred to as an "older white male" asked Benham to calm down and told him that police were on their way.

Benham -- who was reportedly highly intoxicated -- refused to calm down and instead began to shout antigay epithets and punched first one man, who he called a "San Francisco faggot" and then kicked another man in the groin and grabbed at his head.

That was when a group of "three to five male passengers" converged on Benham and tackled him to the ground.

Officer Derrick Niblett's report said that he arrived at the gate and "I intervened to control the situation, but the subject in question [Benham] continued to struggle with me and the unidentified passengers while he was on the floor.”

More officers arrived on the scene. Benham was placed in handcuffs and subdued, but continued to spout insults at the police.

“The subject continued to be belligerent as Officer Mister and I assisted him to his feet. As the subject was talking, I noticed his speech was slurred. I also noticed that he had glossy, blood shot eyes,” Niblett reported. “The subject was deemed to be a danger to himself and to others and was placed under arrest for public intoxication and simple assault.”

DallasVoice.com went on to report that Benham was arrested and jailed in September of 2013 for property theft and in 2012 for "failure to appear."

Furthermore, "He has also been in trouble with the US Department of Agriculture at least twice for violations of the Horse Protection Act for allegedly mistreating Tennessee Walking horses he was supposed to be training. He was charged for 'soring' a horse named Major General’s Ritz in the 43rd Annual National Walking Horse Show held March 18, 2011 in Shelbyville, and again for doing the same to a horse named 'Willie Twilight' on Aug. 31, 2012, at the 74th Annual Tennessee Walking Horse National Celebration, also in Shelbyville."

"Soring," according to the USDA is "a cruel and abusive practice used to accentuate a horse’s gait. It is accomplished by irritating or blistering a horse’s forelegs with chemical irritants (such as mustard oil) or mechanical devices" to make the horses adopt a Tennessee Walking Horse's distinctive high-stepping gait.

Normally, the walk is developed through years of careful training, but Benham hoped to pass the horses off by torturing them until they were unable to step normally. He was fined and disqualified from showing horses for six months.