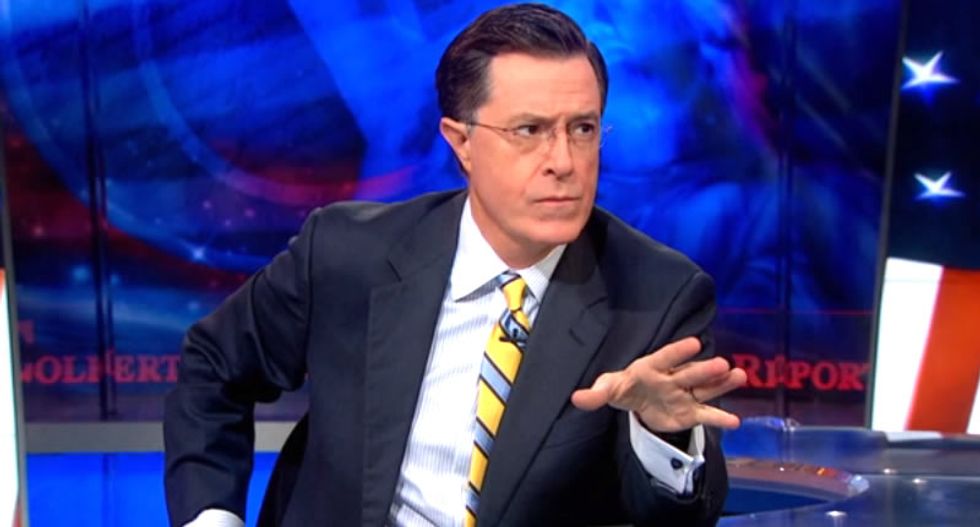 On Thursday night's episode of The Colbert Report, Stephen Colbert lit into a number of Fox News personalities for their fear-mongering coverage of Ebola.

In a segment entitled "Deathpocalypse Now: Ebola In America: 50 States Of Grave," Colbert began by saying he wouldn't be "fooled by the so-called experts and their so-called medical degrees," then cut to a segment from yesterday's Fox & Friends in which Dr. Dalilah Restrepo, an infectious disease specialist, tried to calm the hosts fears about Ebola.

"Ebola is very infectious," she said, "but not very contagious," she said by way of explaining to the Fox co-hosts how difficult it is to contract the disease.

But Elizabeth Hasselbeck was undeterred. "You have a very calm tone," she said, "I guess it has to come with the nature of what you do professionally as a doctor, but I think the rest are saying, 'Wait a minute!'"

Brian Kilmeade then added, "I wonder if you're just trying not to panic us."

As his audience applauded wildly, he said, "Yes, they're like Tinkerbell -- you have to clap to keep them alive."

"With our government clueless about this crisis, it falls to the pundit sector to solve it," Colbert said, before cutting to Fox's Bill Hemmer asking, "Shouldn't we be stopping flights from these Ebola hot zones in west Africa?"

Steve Doocy followed by asking, "Why are we not stopping air travel between Liberia and other nations?"

Brian Kilmeade added, "Shouldn't we just isolate the countries that are experiencing this?"

"Cleary," Colbert replied, "we have to cut off contact with all places with Ebola, starting with a border wall around Texas. Listen, I know you guys always wanted to be your own country, so congratulations -- your founding father is Rick Perry."

Watch the entire episode of The Colbert Report below via Hulu.