Dem rallies for Grimes: McConnell can't win with 'words that come out of Chuck Todd's goatee' 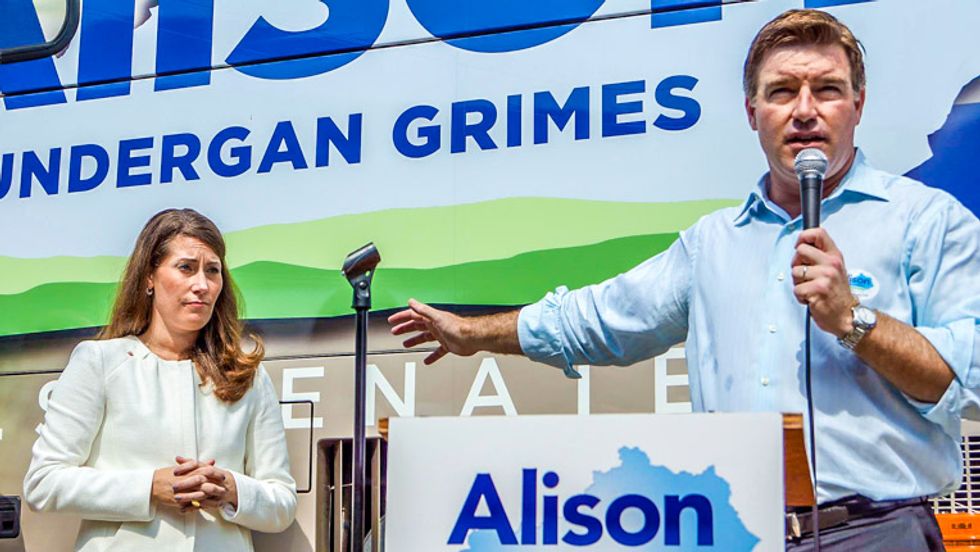 Kentucky Attorney General Jack Conway on Wednesday blasted Sen. Mitch McConnell (R-KY) for suggesting that voters would decide who to elect based on NBC host Chuck Todd's opinion that Democratic candidate Allison Lundergan Grimes had been "disqualified" from office.

On a recent episode of MSNBC's Morning Joe, Todd had asserted that Grimes "disqualified herself" because she had refused to say that she voted for President Barack Obama in the 2012 election. McConnell's campaign quickly turned Todd's comment into a campaign ad, titled "Disqualified."

At a rally for Grimes with Hillary Clinton on Thursday, Conway took to the stage to address the negative ads.

"How soon those people in Washington, D.C. forget," he said. "It was just eight days ago that our own Kentucky poll came out and said that Allison Lundergan Grimes leads Mitch McConnell by 2 points."

"The national media is saturated with all of these negative ads," Conway noted. "They're not working here. You want to know why? Because the people of Kentucky are smarter than that. We're seeing these ads funded by the Koch brothers or corporate special interests that won't tell you who they are, they just have some fancy name."

He argued that if people behind the ads were "telling you the truth or shooting you straight, they'd tell you who they are."

"And what the national folks haven't seemed to catch on to is this, this election is not going to be won by some party hack or words that come out of Chuck Todd's goatee!" Conway exclaimed. "It's going to be won by you on the ground, and your hearts and minds, and Allison's hard work!"

Watch the video below from Allison Lundergan Grimes, record Oct. 16, 2014.