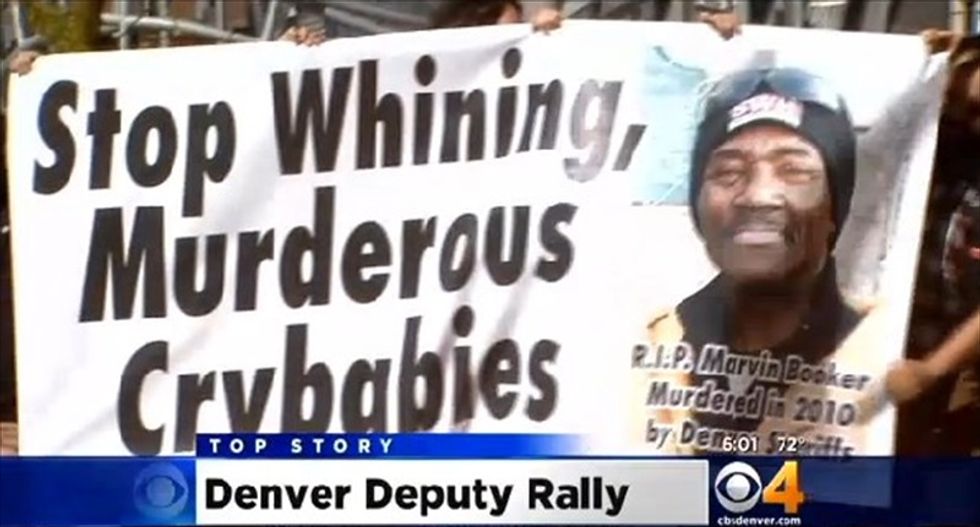 The family of a homeless street preacher who died in a Denver county jail was awarded $4.6 million on Tuesday by a federal jury who found five sheriff's deputies used excessive force to subdue the U.S. Army veteran.

Marvin Booker, 56, died after an altercation with officers as he was being booked into the jail on a drug warrant in July 2010, according to a lawsuit filed by his relatives in U.S. District Court.

The suit accused five deputies with the Denver Sheriff's Department of a "massive over-reaction" when they used a choke hold and stun gun to control the 5-foot-5, 135-pound Booker.

"The deputies then carried Mr. Booker's limp, lifeless, handcuffed body into a holding cell, where they put him down on the floor, face down, summoning no medical attention," it read.

Autopsy results concluded Booker died of cardiac arrest and listed the cause of death as homicide. The Denver District Attorney's Office declined to pursue criminal charges against the deputies, saying the use of force had been justified.

Jurors returned with a verdict in the civil case on Tuesday following a three-week trial in Denver federal court.

"The jury sent an unequivocal message to Denver that it is no longer business as usual, and things must change and change now," the Booker family attorney, Darold Killmer, said after the verdict.

The Denver Sheriff's Department has been under fire in recent months for a series of prisoner abuse cases that have resulted in the city having to make multimillion-dollar payouts over incidents at its two jails.

In August, the city paid $3.25 million to settle another federal lawsuit filed by an inmate who said deputies assaulted him and ignored his cries for help when other prisoners attacked him in a separate incident.

Before that settlement was reached, the judge presiding over the case called on the U.S. Justice Department to investigate the practices of both the Denver sheriff and police departments.

Denver City Attorney Scott Martinez said in a statement after Tuesday's verdict that the city was disappointed but that it respected the legal process.

"The city remains committed to its ongoing efforts to improve the Denver Sheriff's Department," he said.