Denver police freak out over pot-tainted candy as Halloween approaches 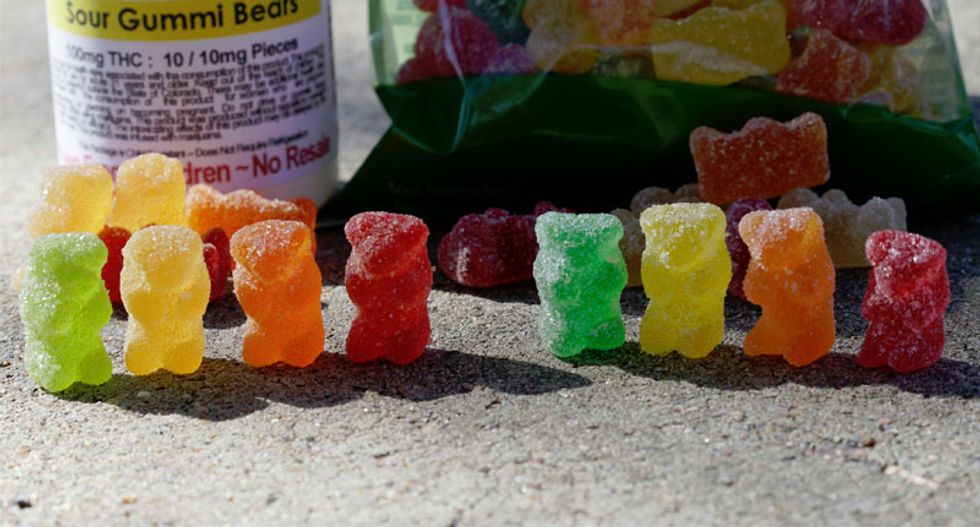 Marijuana-infused sour gummy bear candies (L) are shown next to regular ones at right in a photo illustration near to where they were purchased in Northglenn, Colorado. Picture taken October 16, 2014. REUTERS/Rick Wilking

The two almost identical gummy bears sitting side by side, coated in sugar and tinged with the same red hue, may end up in a trick-or-treat bag, but only one is plain candy. The other is loaded with marijuana.

As children around the country prepare their costumes in anticipation of Halloween goodies on Oct. 31, police in Colorado are warning parents that some treats may not be all they seem.

"Apples, gummy bears, there's a ton of different edible stuff out there on the market that's infused with marijuana," Sergeant Brett Hinkle of the Denver Police Department's marijuana unit said in an official podcast.

Since Colorado and Washington this year became the first U.S. states to allow recreational sales of pot to adults, much of the public debate has focused on marijuana-infused products such as chocolates, cookies and candies, given their potential to attract children or be eaten accidentally.

In the video warning issued by Denver police, the owner of one city pot shop displays the gummy bears and explains how some producers of lower-cost pot edibles buy cheap, generic candy in bulk, then infuse it by spraying it with hash oil.

Gina Carbone, the mother of four boys and co-founder of Smart Colorado, a non-profit aimed at informing young people about the risks of marijuana, says it is a real concern for parents that pot could be in their kid's candy, at Halloween or any other time.

"This is highly deceptive," she said. "Why do regulators and elected officials in Colorado think that everyday candy loaded with marijuana somehow won't appeal to our kids?"

Activists and the police say the main risk to children at Halloween is that they may stumble across pot edibles by accident and mistake them for regular candy, not that they will have been given them maliciously while out trick-or-treating.

"Some of these products look so similar to candy that's been on the market and which we've eaten as children, there's really no way for a child or a parent, or even an expert in the field, to tell," said Patrick Johnson of Urban Dispensary, a Denver marijuana outlet, in the police video.

In May, state lawmakers charged a task force composed of pot industry representatives, health professionals and law enforcement officials with drafting new rules for edibles after they were linked to two adult deaths in media reports.

One new requirement, already passed into law: By Jan. 1, 2016, all pot edibles must be shaped, stamped, colored or otherwise marked with a standard symbol indicating they contain marijuana and are not for consumption by children.

In one case, a college student from the Republic of Congo jumped to his death from a balcony after eating marijuana cookies, and in the other a Denver man was accused of fatally shooting his wife, apparently after consuming something similar and hallucinating.

They include a 7-year-old girl in Basalt who was hospitalized after her mother unwittingly brought home marijuana candy, and a teenager in Steamboat Springs who accidentally ate a whole bar of pot-laced chocolate. Typically, the recommended dosage for such a bar would be just a small section.

Colorado officials say marijuana sales are running at more than $60 million a month. In recent days, both the state's gubernatorial candidates have questioned the legalization of pot.

John Hickenlooper, the incumbent Democratic governor, said voters were reckless in 2012 for legalizing the drug, and his Republican rival, Bob Beauprez, said people should be asked again "if the citizens think that this is maybe a step we've gone too far."

Meanwhile, police say parents should check to see that candy is made by well-known brands, tossing out anything that appears tampered with. ( Video: )

"The only ones who'll be upset about that are the children's dentists," Johnson said in the video.