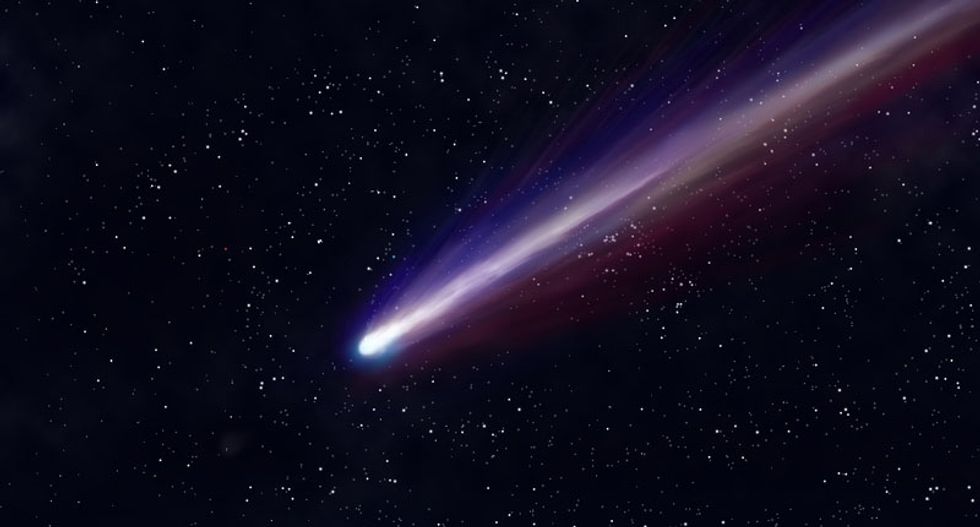 Illustration of a comet flying through space (Shutterstock.com)

A comet the size of a small mountain is about to skim past Mars, and NASA hopes its spacecraft will be able to photograph the once-in-a-million-years encounter.

Astronomers do not expect it will come any where near colliding with Mars, but they do hope it will be close enough to reveal clues about the origins of the solar system.

That is because the comet is believed to have originated billions of years ago in the Oort Cloud, a distant region of space at the outskirts of the solar system.

"Comets such as C/2013 A1 are essentially dirty icy snowballs with rocks and dust embedded in frozen gasses," said Dan Brown, an astronomy expert at Nottingham Trent University.

"It is on its first run towards the center of our solar system and its material is virtually unchanged by the rays of the sun and can give us an insight to the material composition of our early solar system 4.6 billion years ago."

The comet is flying through space at a breakneck speed of 122,400 miles per hour.

Another interesting thing about the comet, about a mile wide in diameter, is that it is only about as solid as a pile of talcum powder.

NASA has manuevered its Mars orbiters to the far side of the planet so they won't be damaged by the comet's high-speed debris.

Even as the Mars Reconnaissance Orbiter, Mars Odyssey and MAVEN have been repositioned to avoid hazardous dust, scientists hope they will be able to capture a trove of data about the flyby for Earthlings to study.

NASA's two rovers -- Curiosity and Opportunity -- will turn their cameras skyward and send back pictures of the comet's pass in the coming days, weeks and months, the US space agency said.

"The orbiters will keep a close eye on the show," said Rebecca Johnson, editor of StarDate magazine.

"They'll study the comet itself, which is a small chunk of ice and rock. They'll also study the cloud of gas and dust around the comet, as well as its long tail," she said.

"And they'll measure how the gas and dust interact with the Martian atmosphere."

The comet has traveled more than one million years to make its first pass by Mars, and will not return for another million years, after it completes its next long loop around the sun.

The comet was discovered by Robert McNaught at Australia's Siding Spring Observatory in January 2013.

Its flyby of Mars is not likely to be visible to sky watchers on Earth.

But the encounter is of great interest to scientists, particularly since there are so many spacecraft on and around Mars to record it.

"As it zips toward the sun, it gives scientists a chance to see a relic from the distant past -- a snowball that preserves the same ingredients that gave birth to our own world," said Johnson.