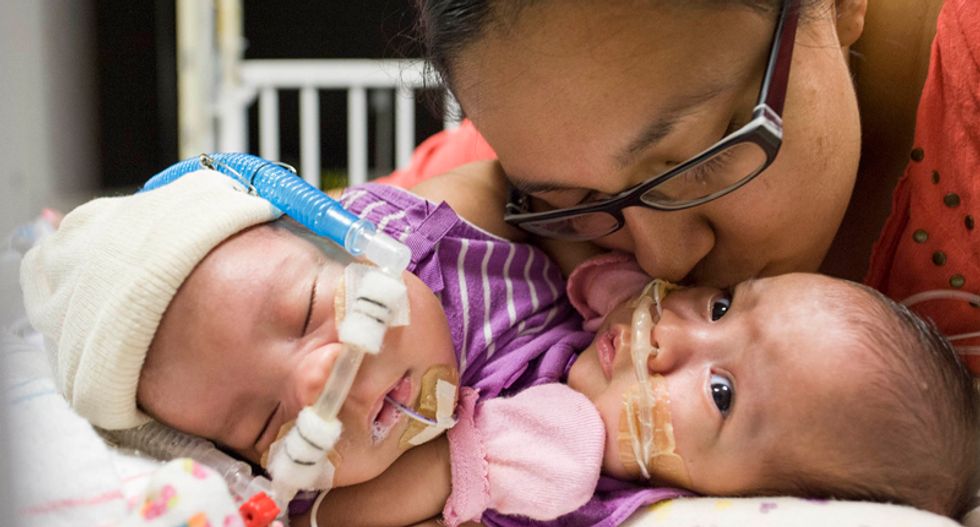 HOUSTON (Reuters) - Conjoined 6-month-old twin girls will begin to undergo tissue expansion this month to stretch skin that will be used to cover patches of their bodies when they are separated in a surgery planned for December.

The tissue expansion for Knatalye Hope Mata and Adeline Faith Mata is expected to take six to eight weeks. The girls are joined at the abdomen and share a liver, diaphragm, pelvis, intestines and the lining of the heart.

"When I think about December I get that sick feeling in my stomach. I want to know how much pain they are going to feel after. What is it going to be like for them?" said their mother, Elysse Mata.

"They are where they should be developmentally. They reach up for toys, they reach out for us when we get close and talk to them," she said.

The girls were born via cesarean section at nearly eight months' gestation and will be separated at Texas Children's Hospital in Houston by a team of surgeons in a long and arduous procedure.

"The intestines appear to be intermingled but there appears to be enough intestines for both children," said Dr. Darrell Cass, pediatric surgeon and co-director of Texas Children's Hospital Fetal Center.

The surgery will occur in two shifts with teams of pediatric, urological, plastic, orthopedic, cardiac and gynecological surgeons. The separation team will start and the reconstruction team will complete the process.

Surgeons at Texas Children's Hospital in 1992 successfully separated Tiesha and Iesha Turner, who were 1 year old and shared a sternum, liver, entwined intestines and fused organs.

Conjoined twins occur once every 200,000 births and most do not survive. Approximately 40 to 60 percent of conjoined twins arrive stillborn, and about 35 percent live only one day, according to the University of Maryland Medical Center.

Mortality rates for twins who do live and then undergo separation vary, depending on their type of connection and the organs they share, it said.

The Mata family's life began to change in January when a routine ultrasound showed that Elysse Mata was carrying conjoined twins. They were referred to the Texas Children’s Hospital Fetal Center.

The couple and their 5-year-old son relocated from Lubbock to Houston, where the girls were born on April 11.

The babies live in the hospital’s Level IV Neonatal Intensive Care Unit, which is the center of the Mata family’s life.

Elysse Mata spends at least seven hours at the hospital each day, leaving when it is time to pick her son up from school. John Mata, her husband, works full time and spends every weekend at the hospital with his daughters.

Cass said he expects each child to be able to live independently and to have a good life.

"It is likely further reconstructive surgeries may be needed in the future. Perhaps the biggest challenges may be orthopedic and in helping them walk and have normal gait," he said.