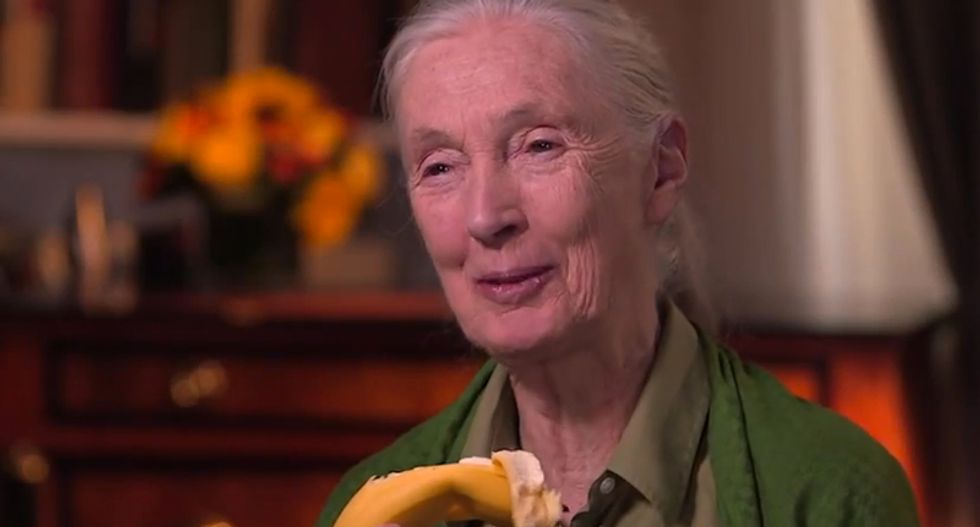 As part of his continuing series, Great Minds - People Who Think Good, John Oliver, host of Last Week Tonight interviewed primatoligist Dr. Jane Goodall, bringing her a banana and asking about her groundbreaking work studying the social interactions of chimpanzees.

Following a clip showing a younger Goodall living among chimps in Gombe Stream National Park, Tanzania, Oliver sat down with Goodall and asked her what made studying them "so fascinating."

"I think because they're so like us," she replied. "And we now know biologically we share 98-plus percent of our DNA with them, blood system, immune system, structure of the brain. It's almost the same."

Discussing the human-like behavior of chimps Oliver asked, "Is that why they make such great pets?'

Goodall explained that they don't make great good pets, saying, "They're very cute and sweet and cuddly when they're little, and what happens when they're five, six, seven, and why do people have their face bitten off?"

Oliver interrupted, saying, "Don't focus on that. Focus on the fact that when you dress them up they're so funny."

Oliver then addressed criticism Goodall received for naming her chimps, instead of the scientific method of assigning them numbers, before suggesting "Jessica Chimpson" and "Poo-throw Wilson."

At Goodall's suggestion, they compromised on "Poo-throw Hitler," after which Oliver offered Goodall a banana and she proceeded to show him the proper chimpanzee way to eat it.