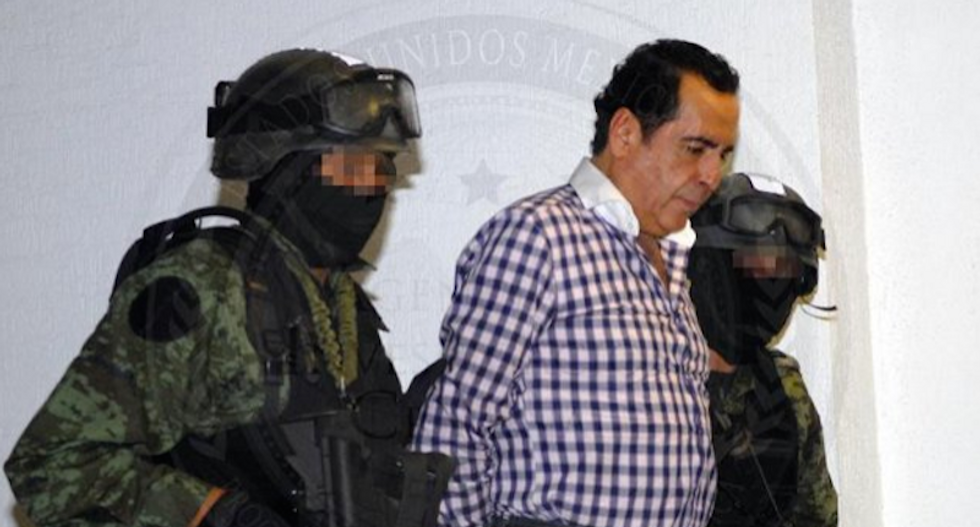 Hector Beltran Leyva, leader of the Beltran Leyva's drug cartel, is led away after a press conference in Mexico City (AFP)

Soldiers captured one of Mexico's most-wanted drug barons in a restaurant in a colonial town popular with American tourists and retirees.

Hector Beltran Leyva, known as "El H", was caught along with a suspected henchman in a seafood restaurant in San Miguel de Allende, a historic town in central Mexico, without a shot being fired, authorities said on Wednesday.

Tomas Zeron, director of investigations at the attorney general's office, said Beltran Leyva was passing himself off as a "well-off businessman dedicated to real estate and art sales to justify his lifestyle."

Beltran Leyva, who was carrying a gun during his arrest, was detained after an 11-month investigation, Zeron said. Military intelligence work allowed authorities to find his home in the central state of Queretaro.

San Miguel de Allende is 300 kilometers north of Mexico City in the neighboring state of Guanajuato. Founded in the 16th century, it is know for is cobblestone streets, well-preserved colonial buildings and old churches that make it a picturesque town that many artists and American retirees now call home.

"This action proves the effectiveness of the public policy of security and law enforcement to get the peaceful Mexico that we desire," Pena Nieto wrote on Twitter.

Beltran Leyva, 49, inherited the thrown of his family's drug clan when his brother and "boss of bosses," Arturo, was killed by marines in 2009 in a mansion in Cuernavaca, a popular weekend getaway for Mexico City residents.

Two other brothers, Alfredo and Carlos, are in jail.

Zeron called Beltran Leyva one of Mexico's top drug traffickers, who specialized in moving cocaine from South America and Central America to lucrative US and European markets.

Mexico had offered a $2.2 million reward for information leading to his arrest, on top of a $5 million US bounty.

He faces charges in Washington and New York courts.

But the two cartels went to war after Alfredo Beltran Leyva was detained in 2008 following a betrayal by Guzman, officials have said.

It was after the split that the Beltran Leyvas formed their own cartel.

More than 80,000 people have died in drug violence in Mexico since 2006, much of the deaths due to turf wars between the country's numerous gangs.

The Beltran Leyva cartel is believed to operate in a third of the country, mainly in the central and southern regions.

The gang has undergone internal power struggles and is known for its vast money laundering operations and ability to corrupt officials.

Beltran Leyva escaped capture once before in 2011, when he fled his home in Mexico City, where he lived with his wife and three of his daughters.

This time, he was arrested by soldiers at a controversial time for the army.

The attorney general's office plans to charge three soldiers with murder for the killing of 22 drug gang suspects who authorities originally said died in a shootout with the military on June 30.