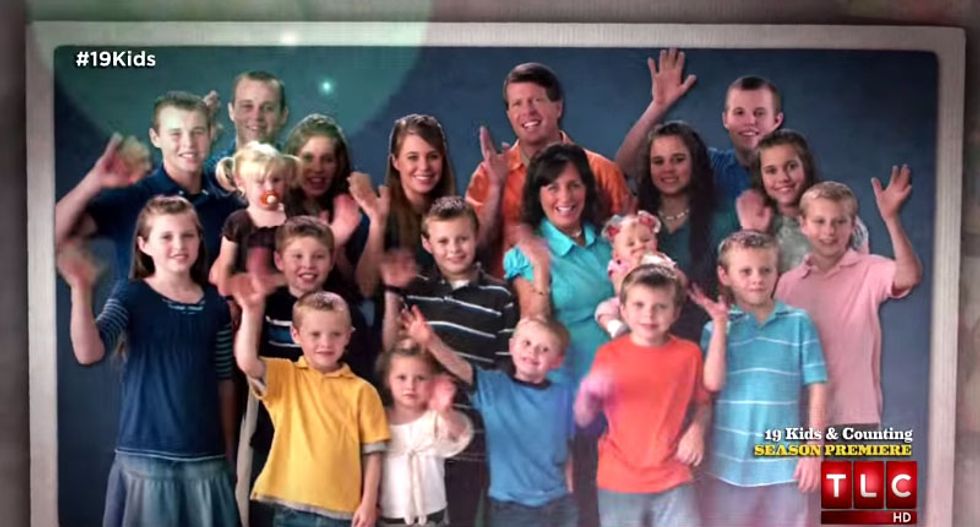 The Duggar's -- conservative Christian reality TV stars -- held a press conference on Monday to express their support for a ballot initiative in Tennessee that would give state lawmakers the power to enact greater restrictions on abortion.

"We have the responsibility under almighty God to protect innocent lives that cannot yet speak for themselves," said Michelle Duggar, according to the Times Free Press. "If we don't speak up and do something to stop this holocaust, the blood of these little ones will be on our hands."

The family, which follows of the Quiverfull movement and is headed by patriarch Jim Bob Duggar, is featured on TLC's 19 Kids and Counting. Seventeen of the Duggar's 19 children attended the recent press conference in Nashville

Josh Duggar, executive director of the Family Research Council Action and the oldest of the Duggar children, said that 50 percent of likely voters in Tennessee supported Amendment 1, a proposed constitutional amendment on the Nov. 4 ballot.

"We are here to educate people on Amendment 1," he said. "When we ask people how of them are pro-life, an overwhelming 64 percent of voters in Tennessee stand for life. "Our mission is clear. We are going to make this very simple. Tennessee is a pro-life state, and therefore Amendment 1 is an amendment that anyone who is pro-life must support."

The amendment would reverse the Tennessee Supreme Court's 2000 ruling in Planned Parenthood v. Sundquist, which held that several anti-abortion laws violated the right to privacy in the state's constitution.

The proposed amendment reads: "Nothing in this Constitution secures or protects a right to abortion or require the funding of an abortion. The people retain the right through their elected state representatives and state senators to enact, amend, or repeal statutes regarding abortion, including, but not limited to, circumstances of pregnancy resulting from rape or incest or when necessary to save the life of the mother."

Carol Price, a retired psychiatrist and volunteer for the Vote No On 1 effort, told the Times Free Press that the proposed amendment puts Tennessean's right to privacy at risk.

"It is about a citizen's right to make private medical decisions in consultation with her physician," she explained. "If this amendment passes it will give legislators that decision-making power, including in the case of rape, incest or a woman's health. And I think when the voters understand that's what it's about, then they are going to vote no."

Members of the Duggar family have been outspoken opponents of a woman's right to terminate her pregnancy, and have frequently compared abortion to the Holocaust. Jessa Duggar said this week that the Holocaust Museum in Washington, D.C., reminded her of abortion in the United States.