Ebola case in Spain fuels fear of European outbreak: 'People are freaked out' 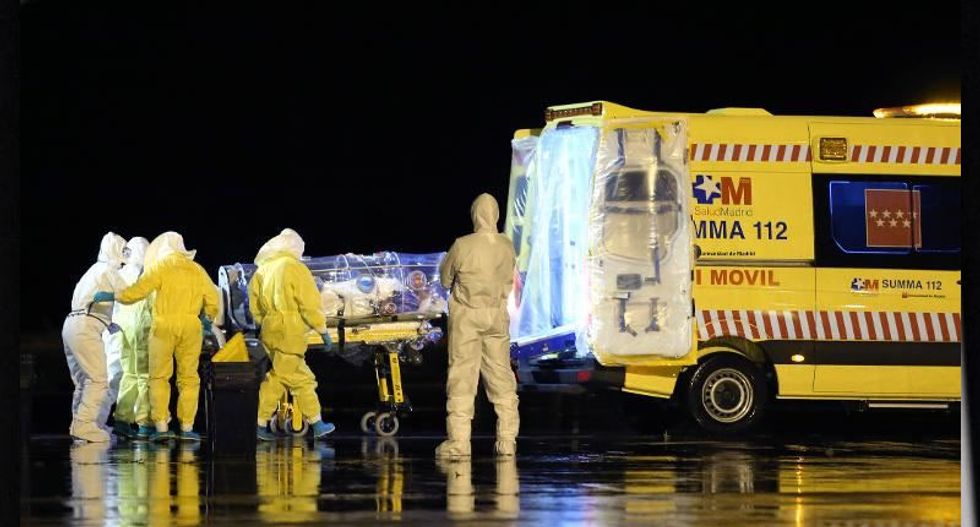 Fears grew Tuesday that the Ebola epidemic was spreading outside Africa after three more people were isolated in Spain following the infection of a nurse in a Madrid hospital.

The EU demanded answers about how the disease could have spread in Spain's most specialist unit treating Ebola where the nurse cared for two elderly Spanish missionaries who died from the virus after being flown home from west Africa.

Ebola has been raging there since the beginning of the year, with nearly 3,500 confirmed deaths so far.

Tests confirmed that the 40-year-old nurse is the first person to contract the virus outside Africa.

Doctors said her husband was at "high risk" and has been admitted to the La Paz-Carlos III hospital, where the nurse worked. Another "suspect case" -- a man recently returned from abroad -- is also being monitored there.

One of the nurse's colleagues, who has been suffering from diarrhoea, has also been taken in for observation.

The infected nurse began to feel ill on September 30 while on leave after treating the two priests in the hospital's isolation unit. But she did not go to hospital until Sunday -- five days later -- complaining of a fever, government officials said.

She is now being treated in the same unit.

Health officials said they were trying to find out who she came into contact with, and were monitoring 30 people -- including co-workers -- for Ebola symptoms.

The infection also sparked questions about how safety procedures were applied when treating the two missionaries.

"People are freaked out," a cardiologist at the hospital told AFP. "We cannot understand how someone who was wearing a double protection suit and two pairs of gloves could have been contaminated."

She claimed Spain was not up to dealing with the hemorrhagic fever and questioned the decision to repatriate the missionaries.

The nurse had treated Spanish priest Miguel Pajares, 75, who was infected with Ebola in Liberia and died on August 12, as well as Manuel Garcia Viejo, 69, who was repatriated from Sierra Leone and died on September 25.

Pajares was the first patient in the current Ebola outbreak to be evacuated to Europe for treatment.

The nurse is believed to have contracted the virus six weeks later while caring for Garcia Viejo. Officials said she visited his room twice, once to clean him and then to collect material after his death.

The team that cared for the missionaries was closely monitored, they said.

The European Commission has written to the Spanish health ministry demanding an explanation, a Brussels spokesman said.

The case followed a wake-up call on Ebola from US President Barack Obama, who warned on Monday that "some large countries are not doing enough" to tackle the epidemic.

Elena Moral, leader of the CSIF-AGCM public workers' union, told Spanish public radio: "The precautionary measures that should have been taken were not effective. The necessary training was not given and we must find out who was responsible."

The head of primary healthcare for the Madrid region, Antonio Alemany, told a news conference that the nurse, who has no children, was in a stable condition but still had a fever.

News of her infection sparked renewed questions about Madrid's decision to repatriate infected missionaries from Africa. Critics said Spanish hospitals were not equipped to deal with Ebola.

"We are working to see if all the protocols which were established were strictly followed," Health Minister Ana Mato said.

"Spain follows all the recommendations of the World Health Organization."

It spreads through bodily fluids, and the only way to stop an outbreak is to isolate those who are infected. There is no vaccine, but one possible treatment, dubbed ZMapp, has been fast-tracked for use.

Ebola has caused 3,439 deaths out of 7,478 cases across five west African nations -- Liberia, Guinea, Sierra Leone, Nigeria and Senegal -- according to the latest WHO tally.

Patients have been treated for the disease in Europe and the United States, but until now all the cases stemmed from people who caught the virus in west Africa.

US health officials said a Liberian man diagnosed with Ebola in Texas had received an experimental drug called Brincidofovir, the first time the medicine has been used to fight the virus.

Also on Monday, the charity Doctors Without Borders (MSF) announced that a Norwegian employee had contracted Ebola in Sierra Leone and would be repatriated shortly.

Another MSF worker, a French nurse, caught the virus while volunteering in neighbouring Liberia but has been cured, the French government said, after being repatriated.

That has not stopped fear of the disease spreading however, with parents at a primary school in the Paris suburb of Boulogne-Billancourt refusing to let their children go to school because a pupil had just come back from Guinea, one the countries worst hit by the virus.