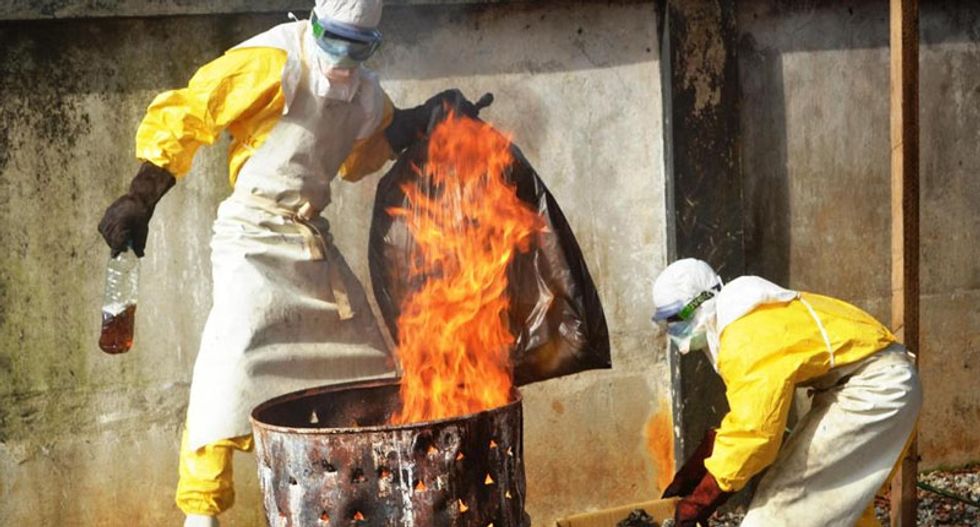 The Ebola epidemic has killed more than 2,400 people in Guinea, Liberia, Nigeria and Sierra Leone this year (AFP Photo/Cellou Binani)

The US prepared Friday to fly home a cameraman who contracted Ebola in Liberia, as the head of the UN's response agency headed to Sierra Leone to lead the fight against an epidemic he called the world's "highest priority".

Ashoka Mukpo, 33, who was working as a freelancer for NBC news, discovered he was running a fever on Wednesday, his network said, and is in quarantine in a Medecins Sans Frontieres (MSF) treatment centre.

Hired by NBC only three days ago, he is the fourth American to contract Ebola in Liberia.

"The doctors are optimistic about his prognosis," Mukpo's father Mitchell Levy said in a message to family and friends quoted by NBC, adding that his son had worked on humanitarian projects in Liberia for several years.

"When the Ebola outbreak occurred he felt compelled to return to Liberia to help shed light on how the crisis was being handled socially and politically," Levy said.

NBC News president Deborah Turness said the rest of the crew in Liberia were being closely monitored but were showing no symptoms.

"However, in an abundance of caution, we will fly them back on a private charter flight and then they will place themselves under quarantine in the United States for 21 days -- which is at the most conservative end of the spectrum of medical guidance."

Anthony Banbury, head of the UN Mission on Ebola Emergency Response (UNMEER), travelled to Sierra Leone on Friday for the second leg of a tour of the three hardest-hit nations.

"The only way we will end this crisis is if we end every single last case of Ebola so there is no more risk of transmission to anyone, and when that's accomplished, UNMEER will go home," he told journalists on Thursday in the Liberian capital Freetown.

The UN envoy said he was intent on contributing to "the highest priority for the international community -- for the whole world, not just the United Nations".

US health officials meanwhile were monitoring 100 people in Texas who had potential contact with a Liberian man diagnosed with Ebola. Four family members were also ordered to stay home.

The man -- the first person to be diagnosed with the deadly disease on US soil -- flew from Liberia and arrived in Texas on September 20 to visit family.

By far the most deadly epidemic of Ebola on record has spread into five west African countries since the start of the year, infecting more than 7,000 people and killing about half of them.

The virus, spread through infected bodily fluids, can only be transmitted when a patient is experiencing the symptoms -- severe fever, vomiting, diarrhoea and, in some cases, massive internal haemorrhaging and external bleeding.

The World Health Organization said in its latest situation update there was still a "significant shortfall" in capacity in west Africa, with 1,500 more beds needed in Liberia and 450 in Sierra Leone.

Around 160 health professionals pledged by Cuba to Sierra Leone arrived Thursday, reported an AFP correspondent at the airport near Freetown.

Save the Children warned as the conference began that five people are being infected with Ebola every hour in Sierra Leone and demand for treatment beds is far outstripping supply.

If the current "terrifying" rate of infection continues, 10 people will be infected every hour with the deadly virus in Sierra Leone by the end of October, the London-based charity warned.

The Gambia said on Thursday it had put in place measures to cope with an outbreak of the scale of Liberia's.

Measures include screening at borders and airports and three major quarantine centres across the country, he said.

US oil giant ExxonMobil said it had limited employee travel to the west African countries hit by Ebola, and delayed the start of an exploration well in Liberia.

Burkina Faso said cycling race Tour Du Faso, which was to be held from October 23 to November 2, would be suspended due to fears of Ebola.

And Germany said that a Ugandan doctor who had contracted Ebola in Sierra Leone while working for an Italian non-governmental organisation had been hospitalised in Frankfurt, the second Ebola patient to be treated in the country.