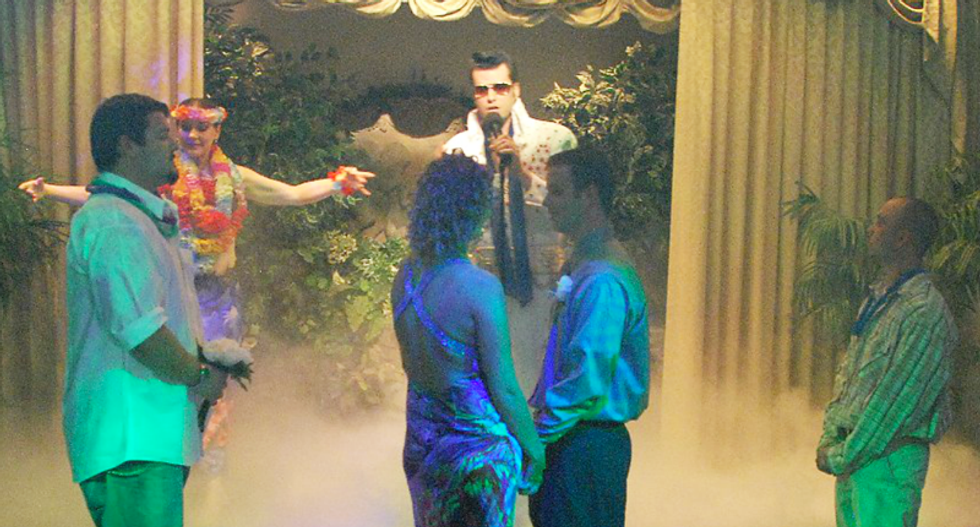 Same-sex couples wishing to have a have a memorable Elvis-themed wedding in Las Vegas will be disappointed if they show up on the rice-strewn steps of the Elvis Wedding Chapel on Las Vegas Blvd.

According to 8 News Now, the owner of one chapel is refusing to sanctify the marriage of gay couples, citing her Christian faith.

The Elvis Wedding Chapel, which offers a variety of Elvis-themed wedding packages including the "Blue Hawaii," the "Rockabilly," and "Elvis in Concert" is refusing to conduct same-sex weddings despite a Federal Court ruling in early October allowing the ceremonies to commence.

News 8 contacted 15 chapels inquiring about their same sex wedding policies, with several of them stating that they would refuse to perform the ceremony.

An employee of the Elvis Wedding Chapel, which also offers non-Elvis weddings, refused to answer questions when confronted by cameras, saying "I'm not going to tell you. It's just -- there is no story here,” from behind a door.

Vegas Wed Chapel owner Dolly Deleon, saying she's a born-again believer in Jesus, stated she wouldn't permit a same sex marriage in her chapel due to her faith.

Deleon said she's been asked to perform same-sex marriages before, but said most people accept it when she says no.

"I would be a hypocrite if I said I'm a Bible-believing person and yet I would perform marriage that believe is solely against God's law,” Deleon said.

According to the ACLU, Deleon would face misdemeanor charges for refusing service to anyone due to their sexual orientation, saying exceptions to the law only pertain to churches.

"The difference between a church and a place of worship and a wedding chapel, is that a wedding chapel is a business so that is covered under the Public Accommodations Law of Nevada,” said Tod Story of the ACLU.

Watch the video below from News 8: