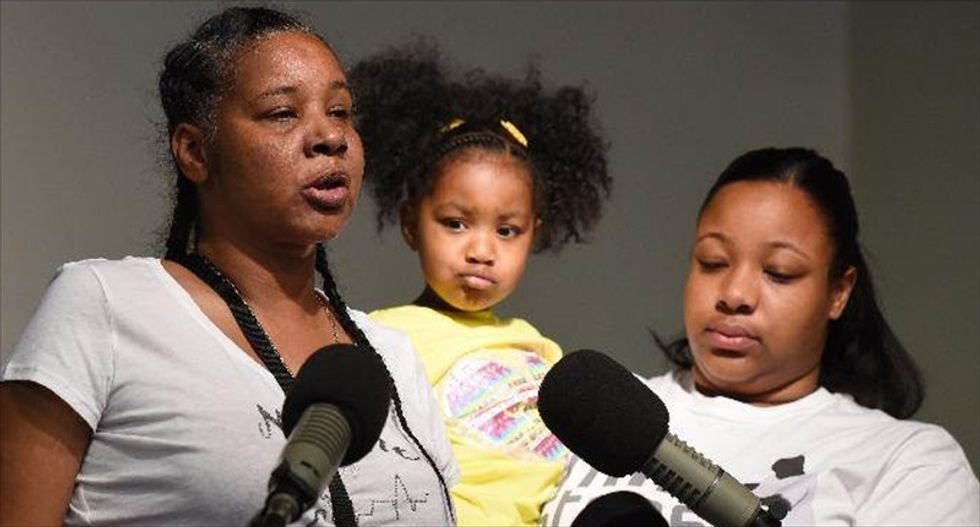 The family of Eric Garner addresses a group gathered at the House of Justice on Aug. 16, 2014, in New York City. By Don Emmert for Agence France-Presse.

The family of a black man who died after being placed in a chokehold by New York police announced Tuesday that they would sue the city and police for $75 million.

Eric Garner, 43, a father of six who was suspected of illegally selling cigarettes, was wrestled to the ground by several white police officers after resisting arrest on July 17 in Staten Island.

A notice of claim received by the city on Tuesday blamed his death on "negligence, recklessness and carelessness," and named eight officers, the city of New York and the New York police department.

Chokeholds are outlawed by New York police. The notice of claim was sent to city comptroller Scott Stringer and is the first step that anyone must take in suing the city.

Stringer's office told AFP the claim was "under review."

Garner's death was classified as a homicide by the New York medical examiner's office, and a grand jury is determining whether there is sufficient evidence to bring charges.

The police officer who had Garner in a chokehold has been identified as Daniel Pantaleo, and he was suspended.

The chokehold was captured live on an amateur video.

Garner, who was obese and asthmatic and repeatedly complained he could not breathe, lost consciousness and was pronounced dead of a heart attack after being transferred to a hospital.

His death set off intense reactions and several protests in New York reminiscent of those in Ferguson, Missouri, over the August 9 police shooting of unarmed black teenager Michael Brown.

Garner and Brown's deaths have sparked debate about U.S. police tactics, particularly with regard to African Americans.