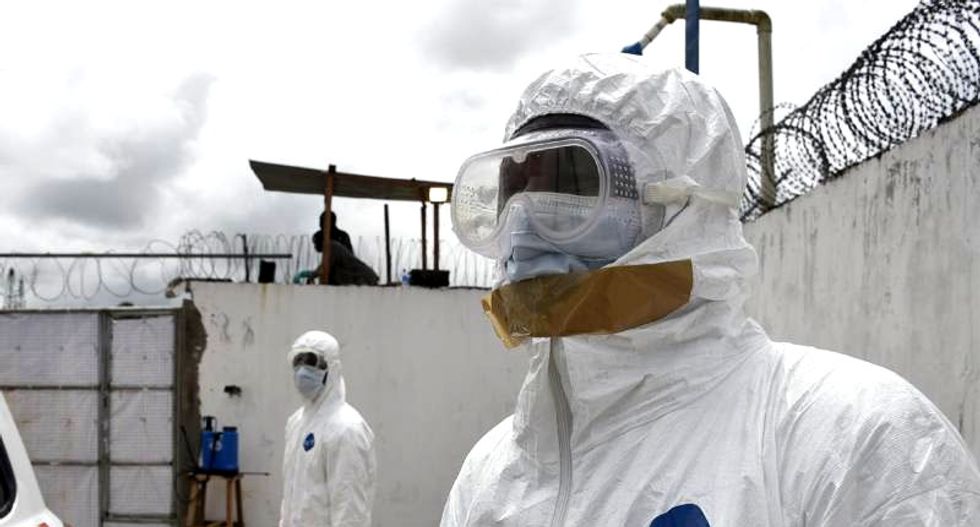 Health workers in protective suits look at an ambulance upon its arrival at Island Hospital in Monrovia on September 30, 2014 (AFP Photo/Pascal Guyot)

The first patient to be diagnosed with Ebola in a U.S. hospital was evaluated initially and turned away, a critical missed opportunity that could result in others being exposed to the deadly virus, infectious disease experts said.

On the patient's first visit to Texas Health Presbyterian Hospital in Dallas last Friday, he walked into the hospital presenting “non-specific symptoms” and was sent home with a prescription for antibiotics, Dr. Edward Goodman, an infectious disease specialist at the hospital, told a news conference on Tuesday.

On the second visit two days later, the patient, who has not been identified, arrived by ambulance, potentially putting at risk the emergency responders who transported the patient that Sunday. They have been quarantined but so far have tested negative for the virus.

For months, the U.S. Centers for Disease Control and Prevention (CDC) has been warning American hospitals that Ebola was just a plane ride away. The CDC has urged hospital emergency department staff to ask patients whether they have recently traveled to Liberia, Sierra Leone or Guinea, the three countries hardest hit by the worst Ebola outbreak on record.

At least 3,091 people have died from Ebola since the West African outbreak was first reported in a remote forest region of Guinea in March.

It was only on that second visit on Sunday, however, that the hospital learned that the patient had recently arrived in the United States from Liberia and admitted him to an isolation unit.

Dr. Goodman said the hospital is reviewing what they might have missed on the patient's initial visit. "Our staff is thoroughly trained on infectious disease protocols. We have been meeting literally for weeks in anticipation of such an event," he said.

In the early stages of infection, Ebola resembles many other viral illnesses, causing headache, fever, fatigue, muscle pain and sore throat, which is why health experts stress the need to ask about travel histories.

The two-day lag “is a critical point,” said infectious disease expert Dr. Michael Osterholm of the University of Minnesota. “It is going to be very important to go back and look at this and ask basic questions about what happened and could it have been handled differently” so the patient was not in the community and at home for two days while he was contagious.

If he appeared to have Ebola-like symptoms, asking about travel history should have been a tipoff to test for that disease, Osterholm said.

“Once someone hits a healthcare setting, asking about travel history should be a standard question today,” he said.

CDC Director Dr. Thomas Frieden said in a news conference that it is possible some people who came in contact with the man could become infected with Ebola, but it probably would only be a handful of people, mostly family members.

Osterholm was also struck by the fact that the man was apparently not a healthcare worker caring for Ebola patients in West Africa, as were five other patients exposed to the disease there and were airlifted back to the United States for treatment.

That raises questions about how the Texas patient contracted the disease.

“In any kind of emergency you wish things could have gone a little bit quicker,” said Gerald Parker, vice president for Public Health Preparedness and Response at Texas A&M Health Science Center, referring to the two-day lag between when the patient sought treatment and when he was admitted to the hospital. “But I still give the hospital, state and federal officials high marks in this regard.”

Parker said it is not a surprise to anyone in the public health community that the United States has a case of Ebola, “but it underscores that Ebola is a global and national security issue and that we need to double down on our efforts to help West Africa get this outbreak under control.”

Epidemiologist Ann Rimoin of the University of California Los Angeles was not overly concerned about the time lag, given the fact that Ebola can only spread through direct contact with the bodily fluids of an infected patient.

“Until someone becomes very, very ill they are not very contagious,” said Rimoin, who was flying to the Democratic Republic of Congo on Wednesday to conduct public health research there. The hospital “probably suspected typhoid or malaria, which is far more common.”