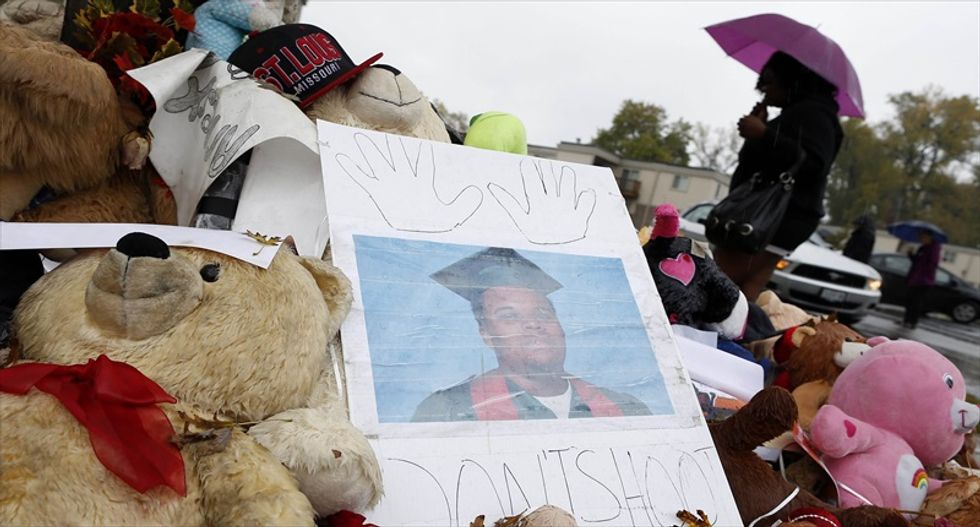 A woman walks by a memorial set up for Michael Brown in Ferguson, Missouri, on Oct. 10, 2014. Brown was killed by Ferguson police officer Darren Wilson. Photo by Jim Young for Reuters.

The newspaper, citing law enforcement officials, said investigators had all but concluded there was not a sufficiently strong case to prove officer Darren Wilson violated the rights of 18-year-old Michael Brown when he killed him in the St. Louis suburb on Aug. 9.

At issue is whether Wilson had reason to believe he was in danger in his confrontation with Brown after he had asked Brown to get out of the middle of a street.

The Post cited a source who had been briefed on the investigation as saying: "The evidence at this point does not support civil rights charges against Officer Wilson."

Justice Department spokesman Brian Fallon was quoted by the Post as saying its report was based on "idle speculation." An attorney for Brown's family declined to comment to the newspaper on "something that is not official," while Wilson's lawyer did not respond to requests for comment.

Earlier this month the St. Louis Post-Dispatch published a leaked county autopsy report that indicated Brown had residue on his hand that could mean he struggled for Wilson’s gun while the officer was in his car. Some witnesses have said Wilson shot Brown again after he got out of the car even though Brown's hands were raised.

Brown's death drew attention to race relations in the United States and police tactics in Ferguson, where much of the population is black and the police force is mostly white.

U.S. Attorney General Eric Holder said last week he expects the Justice Department's investigation into the shooting to be complete by the time he leaves office. Holder said in September he would not step down until his replacement was chosen and confirmed by the Senate. The Obama administration is expected to nominate a replacement by the end of the year.