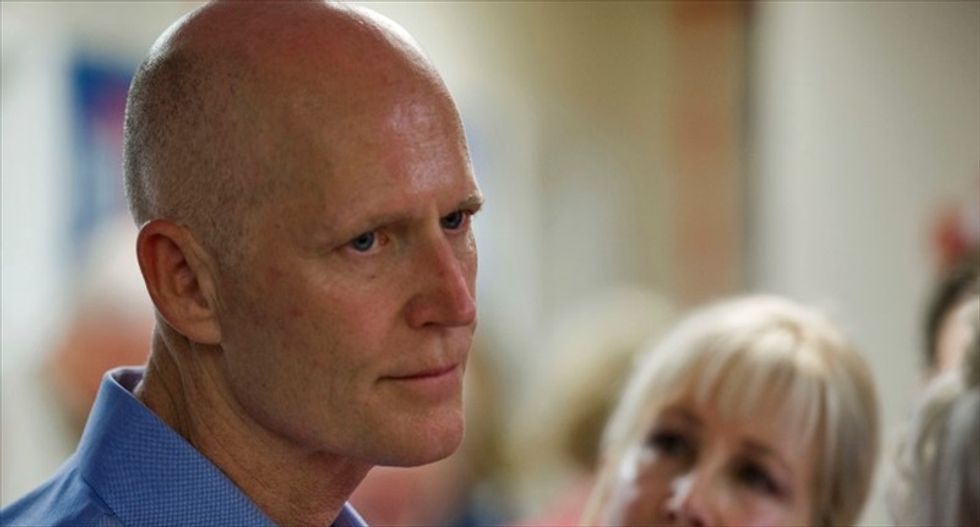 Florida Republican Governor Rick Scott, running for re-election, meets supporters as he visits a campaign office with his wife Ann on Florida's primary election day in Tampa, Florida, on Ausg. 26, 2014. By Steve Nesius for Reuters.

Florida Governor Rick Scott failed to report more than $200 million in assets on state financial disclosure records, according to a lawsuit filed on Wednesday by the Democratic nominee for state attorney general.

The complaint, which Scott's campaign dismissed as political "mudslinging," came days after two major state newspapers raised questions about Scott's financial disclosures and a blind trust he created after his 2010 election.

Scott, a Republican, is locked in a tight race for re-election with Democrat Charlie Crist in an expensive and closely watched political battle in the country's largest swing state.

George Sheldon, a lawyer running for state attorney general, alleged that Scott controlled a "complex web of investment vehicles," including at least six trusts, and other accounts valued at $340 million, while his public financial report, filed with his re-election papers, showed a net worth of just over $132 million.

Sheldon, a former assistant attorney general, told a news conference the public needed to be able "to determine whether he (Scott) has a personal financial stake in the decisions he makes as a public official."

The Miami Herald and the Tampa Bay Times previously reported on the governor’s investments in companies that have benefited from his policies, including oil and gas ventures.

Greg Blair, a spokesman for Scott’s re-election campaign, shrugged off the lawsuit, saying: "Governor Scott opened the blind trust he formed in 2011 for the sole purpose of providing transparency and publicly listed his assets on his financial disclosure in June."

Crist, a former Republican who preceded Scott as governor, has been hammering Scott as "too shady for the Sunshine state."

The Scott campaign charged that Crist had issues of his own, including past associations with imprisoned Ponzi schemer Scott Rothstein and former Florida Republican chief Jim Greer, who served time for defrauding the state party as Crist's hand-picked chairman.

Sheldon argued that Scott’s blind trust did not comply with the state's 1976 "Sunshine Amendment," which requires public officeholders to disclose assets valued at $1,000.